After the intensity of yesterday’s quarter finals, today we have a series of matches as the penultimate step towards determining the rankings between nine and 16. In the first match of this series, Poland meets Catalonia, then England will play Hungary, followed by Ireland versus Slovakia, then Japan takes on Australia.

Winners of the first two will play off for ninth place, losers for 11th, while the winners of the other two will contest 13th place. First however New Zealand and Hong Kong face off in their round robin game of the pool for places 17 to 20. Each has had two wins already in this pool and will therefore meet again on Saturday morning for the honour of finishing in 17th place at this tournament, regardless of the outcome of today’s game.

From today on all remaining games at the IKF WKC 2019 are at KwaZulu Natal University’s Westville Campus. 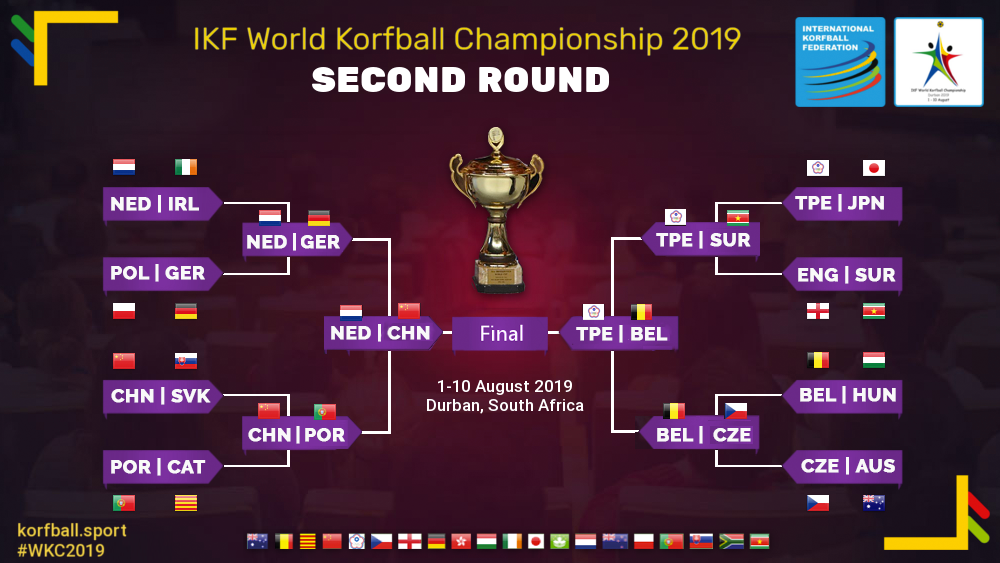 Besides the competition, the IKF Korfball World Congress 2019 has also started with delegates from many countries participating and attending to different panels and speeches. 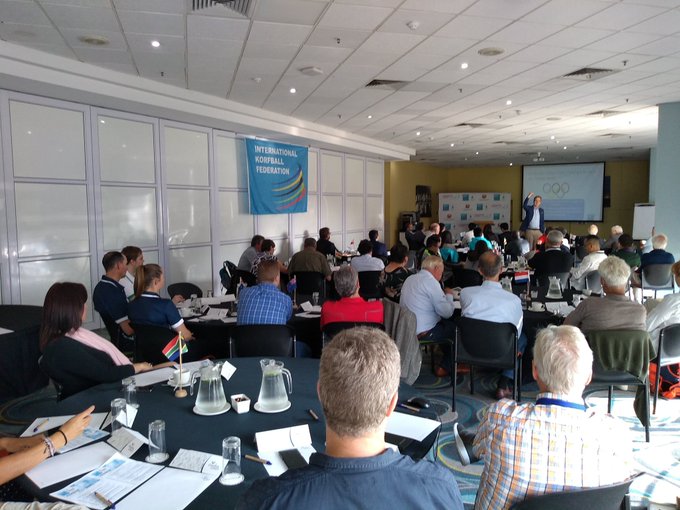 This was a round robin game in the pool for places 17 to 20. New Zealand and Hong Kong have each had two wins already in this pool, and will therefore meet again on Saturday morning for the honour of finishing in 17th place at this tournament. These two teams know each other well from frequent Asia Oceania meetings, where Hong Kong has usually held the advantage, as reflected by its 11th place in the IKF rankings, compared to New Zealand’s number 16. New Zealand came to support Suriname in their quarter final yesterday and the Pan American champions returned the favour in the stadium today, creating a great atmosphere. After the first quarter Hong Kong had the lead by 5-8. New Zealand had the better of the second quarter, though for Hong Kong, two smart goals by the speedy Ching Yu Chan kept her team ahead at half time, just, by 10–11. New Zealand powered away at the start of the second half to take the lead for the first time, though an effective time out by Hong Kong coach Warman Cheng stopped the rot, and after the end of the third quarter it was all locked up at 16–16. Three goals early in the final quarter built an advantage for Hong Kong that New Zealand was unable to overcome, though both sides may have been holding something back ahead of their next meeting. While Hong Kong will take a psychological advantage, both teams can be reasonably satisfied with their performances here, and will be looking forward to their next encounter on Saturday, which will have greater meaning attached. Final score: 19–22.

At this point of the tournament we have a higher chance of closer games, and from the start these two teams were well matched, as would be expected from their IKF rankings of 12 and 13 respectively. Poland gradually gained control, using their greater physical presence and the hot hands of Tamara Siemieniuk to assert themselves over Catalonia, who tended to become flustered and struggled to recycle the ball in attack, Krzysztof Rubinkowski and Kamil Musialinski controlling the post at each end. Poland had the advantage at half time by 8-6. After Poland extended the lead still further early in the second half, Marc Castillo Garagol scored two consecutive goals to keep his team in touch, then a Javier Navarro buzzer beater equalised The game for Catalonia at the end of the third quarter. Goals were scarce in the final quarter, though Poland was just ahead. Castillo appeared to have won it for Catalonia with 38 seconds remaining, only for Izabela Kolodziejczyk to hit back almost immediately. Both teams had an opportunity to attack in the remaining 30 seconds, though neither could convert, so we went to golden goal for the second time in the tournament. Tension almost overcame both teams, as first Catalonia missed a penalty, then Poland unbelievably allowed the shot clock to run down during their attempt to score. In the end, Alba Rosa found space at the back of the court and fired home to end the contest and take Catalonia through to face the winner of the next game, between England and Hungary for the ninth ranking at the IKF WKC 2019. Final score: 14-15 (golden goal).

England started best, with three unanswered goals, then Hungary worked their way into the contest with Zsolt Majer particularly productive. At the end of the quarter however, Hungary‘s lead was cut to just one with an excellent long shot to beat the buzzer from Kieron Hicks. With 14 minutes gone, Lexi Falcsik scored from a smart running in shot to put Hungary up by three for the first time, shortly after which she earned a penalty, converted by Kristof Bellusz, to further consolidate the lead. An even more spectacular buzzer beater, this one by Shannon Jones, with one hand, from eight metres, kept England in touch and set up the second half with 8–11 showing on the scoreboard. Taking that goal as inspiration, and with a few astute substitutions, England stepped up in the third quarter with several good goals, and greater defensive pressure, to turn the score around to 14-12 with ten minutes remaining. Despite some excellent goals by Hungary, England was able to use the clock efficiently, and a goal by Neala Brennan with three minutes remaining re-established the three goal barrier that was enough to keep England safe, particularly after Hungary missed a penalty in the next minute. England will play Catalonia for the tournament’s ninth ranking. Final score: 20-18.

These teams have history, most recently when Ireland won a tight and crucial game at last year’s EKC over Slovakia to qualify for this tournament at the expense of their opponent, who subsequently received an invitation to South Africa after two of the original qualifiers withdrew. Yet to record a win at their first IKF WKC, Ireland was determined to put that right today. An even first quarter saw Slovakia slightly ahead after 10 minutes, both teams scoring within the final seven seconds of the quarter for 5–6. With 14 minutes gone, Petr Busik scored a penalty to take Slovakia to a three goal lead for the first time, and at half time his team had a useful, though not decisive lead, by 6-11. Ireland struggled through an 11 minute period without scoring and while Slovakia was not particularly prolific, Zuzana Busikova managed a couple and by the end of the third quarter they had extended their lead to 9-15. From that point, Slovakia was able to control the tempo and despite Shay Conroy’s scoring efforts, he scored seven today, Ireland’s first tournament win was going to have to wait until another day. Final score: 14-18.

Although these two countries come through Asia Oceania qualification tournaments to reach the IKF WKC, this is the first time they have ever met in international korfball. While Australia is ranked higher and has more korfball history, Japan has shown this week that they fear nothing. Both teams scored regularly during the first quarter with Nicholas Bungey and Ren Nagai both taking advantage of tentative defending. Both teams tightened up in the second quarter, though Bungey was still able to find space, firing his team clear by three at half time, 7–10. Australia raised the tempo another notch in the third quarter, increasing the pressure on Japan with some confident, accurate shooting and careful use of the substitutes bench by coach Tim Miller. At 9–16 going into the final 10 minutes, the game was slipping away from Japan, and at the end Australia had done enough to advance to meet Slovakia in the play off for place 13, while Japan will meet Ireland for the tournament’s 15th ranking. Top scorer for Japan was Yuko Anzai with five, while for Australia Nicholas Bungey scored seven. Final score: 13-21. 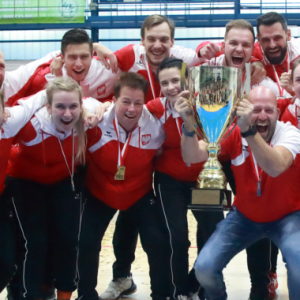 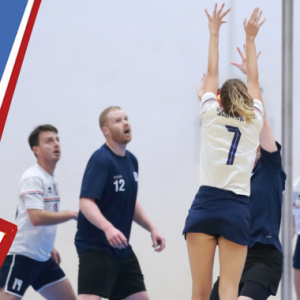 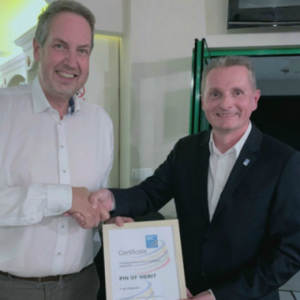 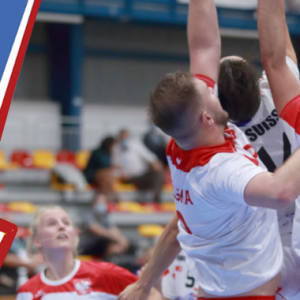 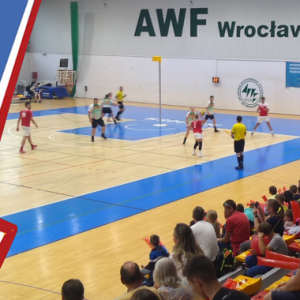 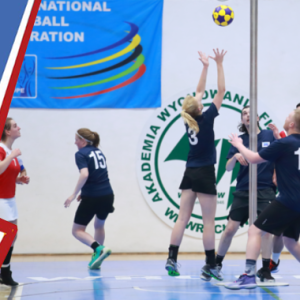 The first day at the IKF European Korfball Championship B-Division 2021 is over. Four matches were played and some of them… 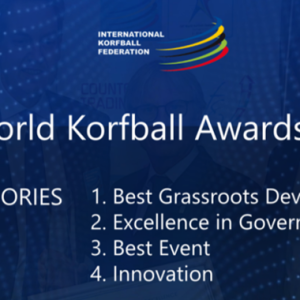 Following a suggestion made by Korfball Sri Lanka in 2019, the IKF EXCO decided to start highlighting excellence in korfball… 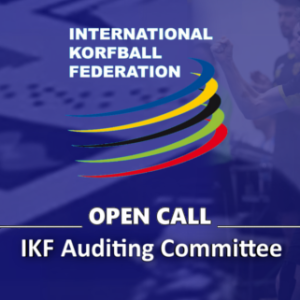 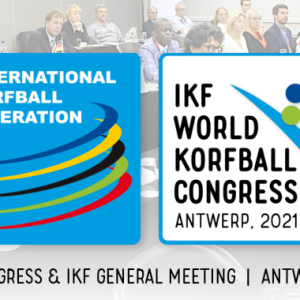 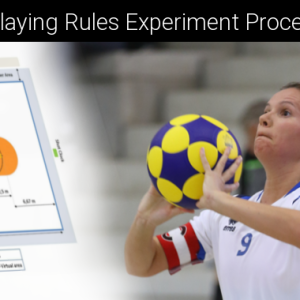 The Rules of Korfball are defined by the International Korfball Federation and must be followed by all IKF members. However,…
IKF WKC 2019 Day 6: Updated reviews, images & videos