The finalists of the IKF World Korfball Championship 2019 are known. Tomorrow the final podium of this #WKC2019 will be revealed. Today’s games will decide the final ranking for places 9 to 16 and RSA and MAc playing for 19-20. Don’t miss any game and follow all them through our web streaming live from Durban’s KwaZulu Natal University’s Westville Campus. 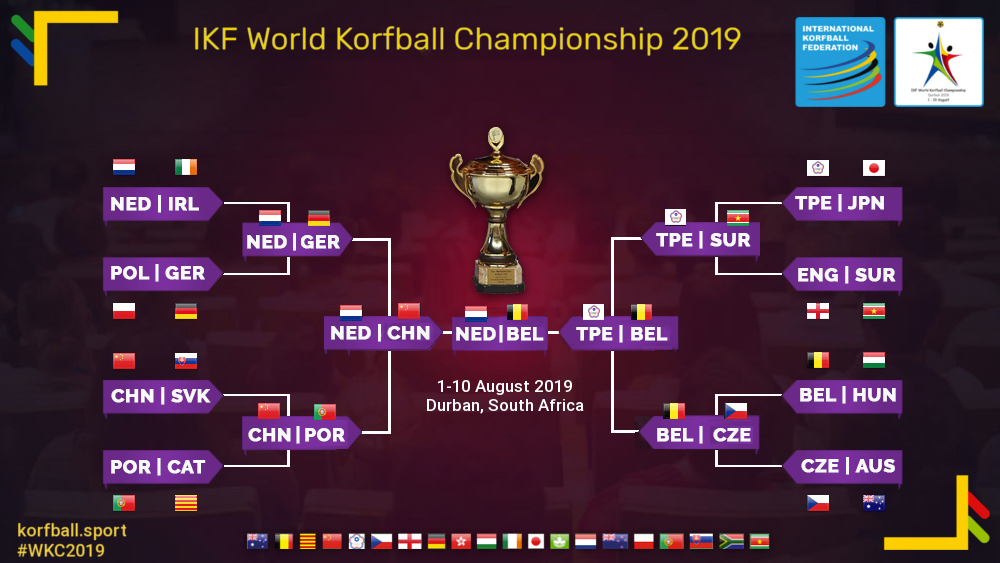 Today’s games will decide the final rankings for half the teams at the IKF WKC. South Africa and Macau met in the first of the day, to determine positions 19 and 20. After the same two teams could not be separated yesterday, and declined to play a golden goal period, this game was far more decisive, with South Africa comfortably dominating. Quicker in their passing, more committed in defence and clinical in their shooting, at half time the host was in the lead by 14–7, though Macau took encouragement from a spectacular long shot with half a second remaining in the period by veteran Michael Io Kei Chek. For those countries that have little high level competition between tournaments, adjusting to the pace of elite korfball is always a huge challenge. In this their final game, South Africa was finally able to lift and show what they are capable of. Liandri Theyse and RF van Niekerk led an excellent team effort and by the end South Africa had secured the 19th ranking. Final score: 23-9.

Meeting to decide the 15th ranking, Japan versus Ireland was a clash of cultures and of playing styles. Ireland started strongly, dominating the rebound in the early stages, and at half time they held the advantage by 10–11. Japan put their superior fitness to good use, raising the tempo after half time, scoring six in a row, and Ireland was not able to keep pace. Frustration at her team’s loss of momentum wore Abby Golding down, which she expressed with a choice phrase to referee Lucas Pazourek, who rewarded her with a yellow card. To the final quarter and Ireland started to rediscover their rhythm, continuing their strategy through the tournament of rotating sharp shooter Shay Conroy into attack as often as possible. With 2.26 left, Mayo Oya scored to bring the margin back to three in favour of Japan, which, even though Ireland scored another two, was able to use the clock more effectively, exploiting the same weakness that Ireland has suffered late in other games. Top scorer for Japan was Hirotaka Kimura with six, while Shay Conroy scored nine for Ireland. Japan celebrated the 15th ranking that their win earned them, while at their first IKF WKC, Ireland finished the tournament without a win. Final score: 19–18.

Australia was ranked tenth coming into this tournament, seven places above Slovakia. However, the first quarter overturned that as Slovakia’s better accuracy near the post, and some inattentive defending by their opponents, took them into a lead, which after 10 minutes was 2–5. Through the second quarter the advance of Slovakia continued, and by half time the score was 6–12. Australia kept pace during the third quarter, though the margin remained the same. In the final quarter however, with coach Tim Miller making good use of his bench, Australia managed to gain ground, bringing the difference back to a single goal a couple of times, the second with 34 seconds remaining. Slovakia worked hard to kill the game, and when Australia had their final attack, they only had ten seconds to make a shot, which was not enough, and Slovakia claimed the 13th ranking, celebrating with a vigorous folk dance. Final score: 19-20.

Two evenly matched eastern European teams went into battle for the honour of 11th place at this tournament Poland with the IKF ranking of 13 compared to Hungary’s nine. Neither has quite achieved their objectives, though both have occasionally looked good this week in Durban. Poland had slightly the better of the first period, with their totem Krzysztof Rubinkowski scoring successive goals to take his team two clear for a lead of 7–5 after 10 minutes. That pattern continued in the second quarter with Poland quicker and smarter than their foe, characterised by a clever move by Tamara Siemieniuk, darting in at a free pass to commit her defender to involuntarily infringing into the oval, turning the free pass into a penalty, a move she has made in an earlier game at this tournament and which has also been posted on social media, so should have come as no surprise. By halftime Poland’s superiority was evident, and the score was 15–8. Into the third quarter Poland pressed home their advantage and extended their lead, playing with more zest than Hungary was showing. In the third quarter Hungary’s purpose increased a little, though only managed to reduce the deficit by one. While Poland was sharing the goals across the whole team, Hungary had fewer scoring options, and as the minutes passed, the game slipped further away from Hungary, who were out of ideas, out of energy and had to be content with 12th place, while Poland claimed 11th. Final score: 21-13.

At the IKF WKC 2015 England played in the bronze medal match, while four years previously Catalonia made it to the equivalent point. For these two therefore to meet for ninth place was not in the script for either. Both put their disappointment behind them in a lively start to the game, which England had the best of. Particularly good goals by Blake Palfreyman and Neala Brennan featured in the first period and with a quarter of the game gone, England had the lead 4-7. In the second quarter Catalonia made a mini recovery, though between the 15th and the 20th minutes, defence dominated and neither team scored. Half time: 7-8. Catalonia rediscovered their scoring touch at the start of the second half and took the lead for the first time, which clicked England back into gear as well, and the lead changed hands through the third quarter. Goals for Alba Rosa and Shannon Jones caught the eye, then an excellent goal by Heather Ikwuemesi looked to have established the lead for England with just a few seconds remaining in the quarter, though an equally sharp move by Jessica Godinez drew a penalty and with 10 minutes remaining the score was 14–14. A sizzling running and shot by Jones put England in the lead by one, then Charlie Vogwill doubled the advantage with three minutes remaining. Playing in his final international Davesh Patel then scored an excellent shot from six metres, which sealed the game for England. Patel left the game shortly after to generous applause, then Olga Gandia also took the flowers to retire from international korfball herself, with similar acknowledgement. England took ninth place, which could be important if one of the World Games 2021 Birmingham, USA qualifiers withdraws. Final score: 15-19.