We are happy to announce the IKF Europa Shield 2016 is back in the IKF Calendar 2016.

After the disappointing message 24 June by IKF Europe of the cancellation of this event the Deutsche Turner Bund in combination with Schweriner Korfball Club ’67 from Castrop Rauxel showed immediate interest to host and organise the IKF Europa Shield 2016.

We reached agreement and the IKF Europa Shield is played from Friday afternoon 22 January till Sunday afternoon 24 January 2016 in Castrop Rauxel, Germany. The venue is Sportshall of Willy-Brandt-Gesamtschule (WBG), Bahnhofstrasse 160, Castrop-Rauxel.

This is the same venue as in 2012 was used for the IKF EShield.

BEC Korfball Club from England is the 2015 IKF EShield winner.

We are confident the DTB and Schweriner Korfball Club ’67 organise a very good event. The DTB has the right to enter 2 teams to this event as organiser.

The final day of IKF Europa Shield 2015 brings us a new champion: BEC KORFBALL CLUB from London, England. They played the final against one of the two host teams, the German SG Pegasus, winning the game 11-7. The last English winner in the IKF EShield was Trojans in 2008. 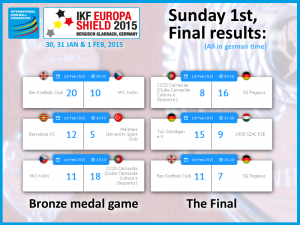 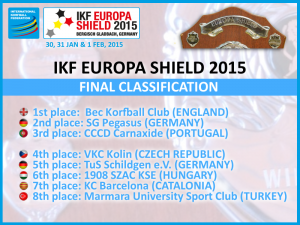 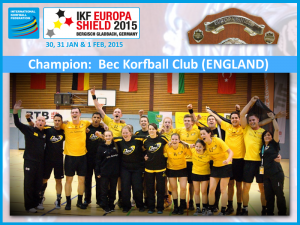 You can find all tournament game statistics in www.worldkorfball.org/.

Here you have some new photos from Saturday’s evening games (day 2), all made by Marco Spelten:

Second day in IKF Europa Shield 2015, many games decided in the last seconds. Suspense and emotion in high quantity. Take a look at today’s results: 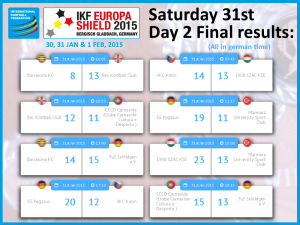 And this is the game schedule for tomorrow’s last games (Day 3). All in German time: 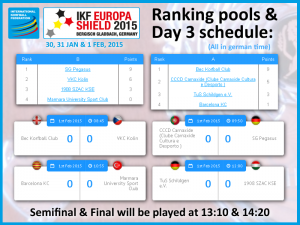 These are the images from Day 2 (Saturday, 31st) made by Marco Spelten:

The first games of IKF Europa Shield 2015 have been played today in Bergisch Gladbach (Germany). Take a look at these first results: 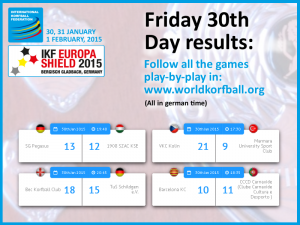 And this is the game schedule for tomorrow (Day 2), all in German time: 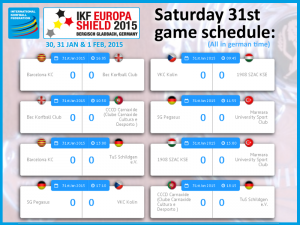 These are the images from Day 1 of tournament, made by Marco Spelten:

This is the Final match schedule of IKF Europa Shield 2015 (all in German times): 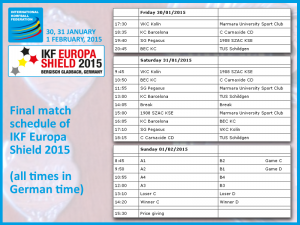 You can also take a look on this photo album with the last preparations in the sports hall: Album

Friday 30, Saturday 31 January and Sunday 1 February 2015 the next IKF Europa Shield takes place in Bergisch Gladbach (near Cologne) in Germany.

The eight competitors are:

More information on the teams and the event; go to Organisers website IKF EShield 2015.

Today the logo of the next IKF Europa Shield event is published.

The IKF EShield 2015 is played in BERGISCH GLADBACH, GERMANY from Friday 30 January till Sunday 1 February 2015.

The organisers of the clubs of Pegasus and TuS Schildgen and the IKF coordinating officer, Mr Teun Lepelaar, are doing their utmost to make this next club event a huge succes again.

The IKF Competitions Committee has reached final agreement with the Royal Belgium Korfball Association KBKB on the venue for the 2015 IKF Europa Cup Finals. These will be held 14-17 January 2015 in Turnhout-Tielen in Belgium. The organization by the KBKB was in jeopardy for a long period after the withdrawal of Boeckenberg in March. The IKF was unpleasantly surprised by the resulting situation and worked with the KBKB to find a solution, which was only finalized today. Vobako korfball club will take the challenge of organizing this at such short notice.

In the same meeting, the earlier agreement on hosting the 2015 IKF Europa Shield Finals in Germany was confirmed, where the German Korfball Association DTB allocated the hosting to the clubs of Pegasus and TuS Schildgen in Bergisch-Gladbach (near Cologne).

The IKF Europa Shield 2014, like almost every previous editions, is one of the most exciting European tournaments of the year. Due to the absence of Dutch and Belgian clubs, other European nations have the opportunity to compete at an equal level. Even the Hungarian team that ended on the last place gave many opponents a hard time. Undoubtedly , teams from nations with strong competitions, had a clear advantage. This was shown by the teams from the organizing country, or should we say region. However it took a golden goal for the former champion, Vallparadis, to qualify for the final, leaving the German opponent to struggle for bronze.

The Hungarians forced their opponents into a golden goal. They much appreciated the chance they got to play good matches far more interesting than within their own competition. Kingfisher (ENG) ended 7th, Brno (CZE) 6th, Adler Rauxel (GER) 5th.

Because of the close gap of the playing level, because at the end of the tournament players get tired, the play got rough which was more or less the case in the struggle for the third place. Anyway Schweriner (GER) was able to beat a very good team from Portugal coached by the enthusiastic Carla Antunes.

The final game was a thriller in the first half. When former champion Vallparadis forgot to score out of many opportunities it was “golden boy” Sergi Gabriel to lead his team to a well earned victory therefore leaving the Shield in Catalonia.

This was a tremendous tournament again with a grand final. Many thanks too multiple volunteers from IKF and from local bodies.

Eight teams will compete to become the 2014 IKF Europa Shield winner. The participants and the match schedule are available on line as well. See under Events.