Congratulations to Mady Tims, IWGA Athlete of the Month for April 2015. The Korfball player (38) from the Netherlands gave her farewell at the Dutch Korfball League Finale on 11 April. More than 10,000 spectators at the sold-out Ahoy arena in Rotterdam experienced the touching goodbye.  She left the court right after her PKC/SWK Groep teammate, Johannis Schott, scored four seconds before the end the winning point.

With a huge cheer from her fans, white tulips from her teammates, and tears in her eyes, it was a moment to be cherished. Her club, PKC, won the final match against TOP by a score of 22 to 21. Mady Tims left the court as a champion. She helped to make it happen by scoring a point  in the final. It was the 500th korf in her career as a player for PKC.

The English commentator of the match described her as the “most fantastic player in the world of Korfball”. Jan Fransoo, President of the International Korfball Federation, called her, “a korfball icon”. She said after the match and her emotional farewell, “Korfball is my passion”. She added, “There are so many great moments I can look back to.”

Indeed, “Lady” (her nickname) Tims is a three-time European Champion, and three-time World Champion with the national team of the Netherland. The Dutch team, with her help, won the TWG 2005 Gold Medal in Duisburg, Germany.

“Winning the title with PKC made my last match so special”, she said after the match in Rotterdam in April. That’s the way she likes to step down. In 2011 when she retired from the Dutch national team, it was the final of the World Korfball Championship in China. The title match against the archrival Belgium was her final international competition. She scored three times for her team, which won 32:26.
Watch her last match and the emotional moment of her substitution four seconds before the end of the final on The World Games Channel.

Learn more about Korfball on The World Games Channel.

The full article plus photos follow the link: Link to the article on Mady Tims

From 29 October till Sunday 8 November 2015 the IKF WKC takes place in Belgium.

The Royal Belgian Korfball Federation (KBKB) and the Karel de Grote-Hogeschool (KdG) – see the KdG website: https://www.kdg.be/international/kdg-in-english – entered into an unique project. Around 40 bachelor students of KdG will develop and program various projects;

The virtual reality game will be integrated in the specific IKF WKC 2015 website.

Groups of students “Multimedia Technology” will compete to deliver the best projectplan in combination with the best virtual reality game design.

The project name is : “TOGETHER FOR KORFBALL”.

The KdG and the KBKB have high expectations. The website and the social media are the main distribution channels for people all around the world. The virtual reality game is innovative and sets a new landmark in korfball and Internet communication.

In the IKF Executive Committee meeting 7 February 2015 in Zeist, The Netherlands the draw for the 10th IKF World Korfball Championship resulted in the following pools: 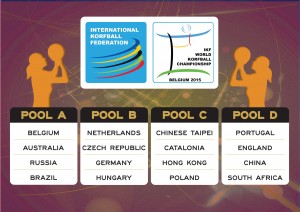 The IKF Executive Committee scheduled the formal meetings for 2015.

During the IKF World Korfball Championship in Antwerp, Belgium:

Following completion of the four continental qualification events in 2014, all countries that have qualified for the IKF World Korfball Championship 2015 are now known.

Qualification criteria were published by the IKF early in 2014, itemising that 16 countries would participate in the IKF World Korfball Championship (IKF WKC), to be held from 29 October to 8 November 2015 in Belgium.

The 16 countries that have achieved qualification are as follows.

From the IKF European Korfball Championship played in Maia, Portugal from 25 October to 2 November, the first ten ranked countries:

From the IKF Pan American Korfball Championship played in Americana, Brazil from 31 January to 2 February, the champion country: Brazil.

Following the last IKF World Korfball Championship held in China in 2011, The Netherlands is the reigning champion. Brazil will participate in the IKF WKC 2015 for the first time.

The qualification criteria for the next IKF World Korfball Championship (IKF WKC) in 2015 in Belgium are outlined in the document that you may find thru the link:Qualification arrangements for the IKF WKC 2015

Wim Scholtmeijer will be the successor as of January 1, 2014 as the national coach of the strongest korfball nation in the world. Wim is at the moment the KNKV U23 coach.

Jan Sjouke van den Bos will continue to serve korfball and international korfball in another function within KNKV, the Royal Dutch Korfball Federation. He will be master coach to develop even further the level and quality of training- and coaching programs. Special attention in his work will be the increase in the competiveness for the top korfball countries and the increase in the number of countries that challenge the so called A-countries; The Netherlands, Belgium and Chinese Taipei.

Van den Bos serves as Dutch national coach since 1999; he is 14 years in his job. He was the first full time bondscoach in The Neterlands. He has an enormous list of championship results: 3 times IKF World Korfball Champion, 3 times IKF European Korfball Champion and so far 3 times gold in the World Games. Another gold medal in Cali Colombia on August 4, 2013 would give a 10th title as national coach.

The KBKB Organising Committee of the 10th IKF World Korfball Championship in 2015 in Belgium has released with full approval of the IKF the event logo.

It shows power. Further it is dynamic, bright and clear.