25/8/2020 – Information about the impact of Covid-19 on the preparations for this event are also included in the invitation letter sent to national federations.

Live games & results will be available on ► www.worldkorfball.sport

Unfortunately, the IKF EXCO has decided to postpone the IKF U19 World Korfball Championship, scheduled for 2 – 4 April 2021, with one year. The current situation regarding the corona pandemic makes impossible to organise this event on the mentioned dates.

The event now is scheduled to take place during Easter next year, 15 – 17 April 2022, in Kutná Hora, Czech Republic.

The IKF would like to express its gratitude towards the CKA for their collaboration and efforts over the last difficult months. The IKF Is fully confident that next years’ edition will be a big success.

Day 1 of the IKF U19 WKC 2019, held from 19-21 April in ‘t Kalverdijkje, Leeuwarden, has come to an end. Today all the group matches and the opening ceremony were scheduled. 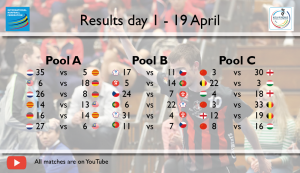 Tomorrow, all the quarter and semifinals will be played for the top two and the two highest ranked third countries. The remaining four countries start to play their matches in the round-robin format.
Moving on to the quarterfinals are The Netherlands, Germany, Chinese Taipei, Portugal, Hungary, Belgium, England and the Czech Republic.
Moving on to the round robin format are Catalonia, Malaysia, China and Hong Kong China.
Tomorrow’s match schedule can be found at the U19 WKC event page. 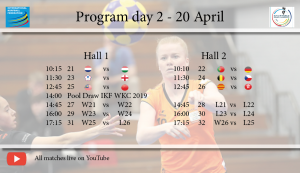 Don’t miss any of the matches by following the live streams on worldkorfball.org, the IKF Social Media channels and via the hashtags #U19WKC and #korfball:
Facebook: @korfball.org
Instagram: @korfball_org
Twitter: @korfball

In just over two months, from 19 to 21 April 2019, the IKF U19 World Korfball Championship (WKC) 2019 will start. The participating countries have been known for a while, but now we can also announce the tournament set-up, the pools for the group stage and the complete match schedule.

The 13 participating countries have been divided into one pool of five and two pools of four countries.

The matches will consist out of four quarters of eight minutes real playing time, with a one minute break between the first and second quarter as well as between the third and fourth quarter. The half time break will take five minutes. Only exceptions are the matches for the 1st, 3rd, 5th and 7th place on the final day of the event. Those matches will consist of four quarters of ten minutes.

From this moment on, you can find the match schedule on the event page and on our Social Media channels. All matches will be broadcasted live on the IKF YouTube channel and on www.worldkorfball.org with live statistics, play-by-play, rankings, top scorers, etc.