Sunday 22 March is the final day of the U17 Korfball World Cup (U17 KWC) in Schijndel, The Netherlands.

The eight participants show their abilities. The match results: Click here for all U17 KWC Match results

From 29 October till Sunday 8 November 2015 the IKF WKC takes place in Belgium.

The Royal Belgian Korfball Federation (KBKB) and the Karel de Grote-Hogeschool (KdG) – see the KdG website: https://www.kdg.be/international/kdg-in-english – entered into an unique project. Around 40 bachelor students of KdG will develop and program various projects;

The virtual reality game will be integrated in the specific IKF WKC 2015 website.

Groups of students “Multimedia Technology” will compete to deliver the best projectplan in combination with the best virtual reality game design.

The project name is : “TOGETHER FOR KORFBALL”.

The KdG and the KBKB have high expectations. The website and the social media are the main distribution channels for people all around the world. The virtual reality game is innovative and sets a new landmark in korfball and Internet communication.

Latest information about the 17th U17 Korfball World Cup in Schijndel, Netherlands.

Poland will not participate in the U17 KWC in 2015. They withdrew. In Pool B Catalonia replaced Poland.

Eight countries and nine teams play in the U17 KWC. The youth teams of the following countries: Belgium, Catalonia, Chinese Taipei, England, Germany, Hungary, The Netherlands and Portugal.

This IKF patronised international korfball tournament for players under 17 takes place in sports centre “Dioscuren” Schijndel 21 and 22 March 2015. The local korfball club “De Boemerang” assists the KNKV in the organisation.

The revised U17 KWC pools are:

Pool B: The Netherlands, Germany, Catalonia, 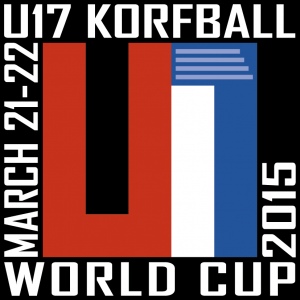 From Friday 3 April till Sunday 5 April 2015 the 20th U19 Korfball World Cup is played in Leeuwarden, The Netherlands. Thirteen teams will be in competition in 2015. The participants travel to the Netherlands from 4 of the 5 IKF Continental Confederations.

The venues are sport centre Kalverdijkje and the Cammingha sports hall (close to each other). The U19 KWC is patronised by the International Korfball Federation (IKF); the KNKV is the organiser.

In 2015 New Zealand participates for the first time in this youth event.

The opening ceremony is scheduled Thursday 2 April in sport centre Kalverdijkje in Leeuwarden..

The U19 KWC started in 1996. Over the years the event is grown and is a fixed event in the international korfball calendar now.

* The regional U19 team (RTC) is playing out of competition.

The draw is based on the IKF Ranking.

The U17 Korfball World Cup participants and the match schedule can be found under: U17 KWC Information; teams, pools and schedule

The 16th edition of this youth event – IKF Patronised – is played Saturday 21 and Sunday 22 March 2015 in Sportsvenue Dioscuren in Schijndel (NED).

The Hungarian Korfball  Association will organize a fun event on 18 January 2015 in the afternoon on the Ice Rink of Budapest, at Heroes’ Square, where korfball will be played on ice, probably for the first time in the history of the sport.

Of course, they will play with skates on.

And if everything goes well, they will play a ice korfball match against a Hungarian youth Ice Hockey national team.

The goal with this event is to

This event shall be the innovative national championship adopting the IKF official rules of Korfball4 recently approved by IKF Council. One single match is played 5 minutes times 4 quarters and one team is composed of 2 female and 2 male players. 2 referees with whistles are arranged. There is no limit on the number of substitutions and the player changed out is allowed to return for playing. The schedule of 1st first playing day was simply for age group U18 (senior  high school) with 6 teams’ participation. The round robin system was used for the top 3 teams and each team had 1 won – 1 loss result so the penalty contest was taken to decide the ranking. Finally Jhongli SHS wins the historical crown. The 1st runner-up is Nankan SHS and the 2nd runner-up is Hujiang SHS. All the U16 matches will be subsequently played on the 2nd playing day.

The playing of Korfball4 is dynamic, spectacular and easily learned. Chinese Taipei Korfball Association is convinced that Korfball4 is a very good alternative game played in much more accessible court to effectively create new korfball population. The highlight of match Jhongli SHS – Hujiang SHS can be seen on https://www.facebook.com/video.php?v=360531074106481

The first IKF Asia U19 & U16 Korfball4 Championships will not take place from 18 – 21 December 2014. IKF Asia is working on new dates in 2015 with the organisers in Indonesia to have the maximum number of teams in competition.

The events are played in 2015 in Bandung, West Java, Indonesia. As soon as the new dates are agreed IKF Asia publishes them.

The korfball promo trip in South America is a huge success. The cooperation between IKF and KNKV contributes to the goals of spreading korfball over the world. Both in Brazil and Argentina the group of trainers and players received a lot of attention and was part in many succesful training sessions. Many students had their first experiences with korfball.

You can watch headlines in the trip. Have a look and watch the three videos produced during the trip; see under ‘Videos’ in the IKF website or the ikfchannel on YouTube.

The final between rivals The Netherlands and Belgium was very close, with half time reached at 12-11 for the Dutch. However, five minutes into the second half, with the score 14-14, the started Dutch an eight minute “blackout” ending with Belgium leading 19-14. Nobody would put their money on the Dutch at this stage but they didn’t give up and equalized just before normal playing time ended, the scoreboard stopping at just 0.1 second as their equalising goal was given, leaving the score at 23-23. The Golden Goal period started with the Dutch shooting precisely to score in their first attack. But Belgians equalised in their attack to make it 24-24. The next attack finished with a wrong Dutch shot and the Belgians used their chance to win 25-24. The last time Belgium had defeated their Dutch rival in an IKF Youth level Championship was 28 years ago in Marbella and it was 23 years ago since the Belgians had defeated their neighbours in any IKF major final.

The bronze medal match was between Portugal and England. This game was not about good quality shooting and was very close until the 33rd  minute when Portugal stepped forward with two goals to open a lead that England could not close. They finally won 14-11 (h/t  5-5) placing Portugal 3rd and England 4th.

In the other matches, the game between Czechs and Catalans was expected to be a close fight, but the spectators saw a parallel with the Brazil world cup semi-final as in only the sixth minute it was already 7-1 for Czechs and the Catalans looked really down. But the Czechs  thought that game was decided and let Catalans to come back to a more acceptable half time score of 13-10 for Czech Republic. In the second half, however, the Czechs didn’t  allowed any more questions to be asked, raising the difference to 10 goals ending game 26-18, confirming the Czechs Republic 5th and Catalonia 6th.

The match for 7th and 8th place was Germany vs. Russia. The Russians started better, but Germany hit  back to lead 8-7 at half time. It remained balanced until midway through the second half when Germany began to  prevail, finally winning 18-13 placing Germany 7th and Russia 8th.

Hungary played Poland for 9th place. The game was equal until half time (7-7) but second half started with a Hungarian offensive and the Poles couldn’t pull back, resulting in a 17-13 win for Hungary placing them 9th and  Poland 10th.

Turkey did not play on the final day and were placed 11th.

The IKF photographer Mr Cor Mantel was around in Olomouc (CZE) to make pictures. We give you an impression.