As far back as 1902, inspired by a game he had seen during a summer course in Sweden, Dutch school teacher Nico Broekhuysen developed korfball as an outdoor sport for mixed groups of boys and girls in Amsterdam. This led to the establishment of the Netherlands Korfball Association and the spread to the rest of the The netherlands and to the then Dutch colonial territories. Korfball was demonstrated at the Olympic Games of 1920 in Antwerp – which led to the establishment of the Belgian Korfball Association in 1921.

An International Korfball Bureau was set up in 1924, which in 1933 changed its name into Fédération Internationale de Korfball (FIK). Korfball groups in other countries started to form, but with limited financial resources it proved very hard to build sustainable korfball development. Still, the national federations of Belgium, Netherlands and Great Britain were able to join forces and organise the first international korfball tournament for their senior teams in 1963. This was followed bu the first edition of the international club tournament, the Europa Cup, in 1967.

The 1970’s proved to be a period of growth, with many more countries establishing national federations and collaboration between them to develop the game. This led to the first IKF World Korfball Championship in 1978. From that point onwards korfball grew and more countries joined the IKF. Various changes of the game were implemented in the years adterwards, with paramount changes such as the introduction of the artifical korf and the elimination of the middle zone in outdoor korfball.

Korfball is a sport played by hand within a rectangular field of play whereby a team of four female players and four male players try to shoot a ball into a korf (basket). The players of the team are split into two zones, attack and defence, each consisting of two men and two women. After very two goals, the divisions switch so attackers become defenders and vice versa. The players can only defend players of the same sex. Each goal is worth 1 point. One of the most important characteristics of korfball is the need to play together to score a goal. This characteristic is enforced by the ban of travelling/walking of the player who has the ball. Passing is therefore necessary to create space to shoot at the korf. More rules are explained in the video below, and the entire set of korfball rules can be found in the document linked below.

You can find the Rules of Korfball 2022 here.

Over the years different formats have been put into practise. In 2015 the IKF published the official beach korfball rules which formalised the 4 against 4 format, with each team consisting of 2 man and 2 female.

During the IKF Executive Committee in September 2016 it was decided to integrate beach korfball in the IKF Competition Calender. Furthermore, the IKF Beach Korfball Committee was installed to stimulate the further development of beach korfball.

You can find the rules of Beach Korfball here.

Outdoor korfball, other than beach korfball, is usually played on (artificial) grass. The set-up of the game is the same as indoor korfball, with two teams of 8 players playing in two zones. Outdoor korfball is mainly played in The Netherlands and Belgium, there is no international competition in this discipline.

You can find the rules of Outdoor Korfball here.

Korfball4 and One-zone-one-post korfball are two forms of korfball that are each being played in one zone with 4 players on each team. These forms of korfball require less space and players compared to the regular korfball format, which makes it easier to organise. Therefore, these forms are mostly used by teams that do not have access to regular sized playing venues and/or have smaller teams. The forms are mostly used in youth competitions and grassroots development korfball.

The rules of Korfball4 can be found here.

The rules of one-zone-one post korfball can be found here. 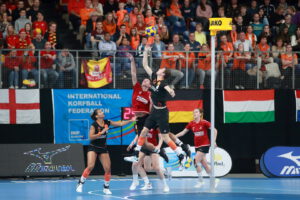 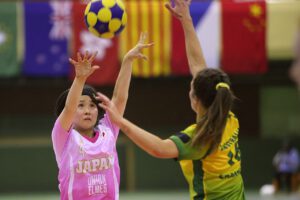 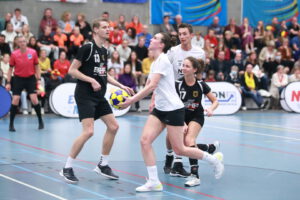 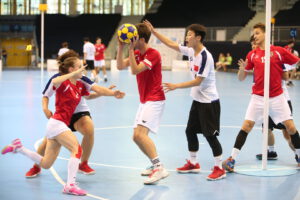