Belgium has always been a superpower of international korfball, contesting the final of every IKF World Korfball Championship since the first tournament in 1978. They also, of course, hold the honour of being the only team to ever deny the Netherlands a gold medal in the historic 1991 tournament.

However, over the past two years the previous script has changed, first at the World Games 2017 when Chinese Taipei beat The Diamonds in a dramatic though ultimately convincing semi-final, then even more surprisingly in the IKF European Korfball Championship 2018 when first Germany then Portugal won out over Belgium to deprive the traditional favourite of even a place on the podium.

Those results have seen Belgium slip from number two to number three in the IKF rankings.

As the director of Koninklijke Belgische Korfbalbond (KBKB) responsible for all national teams, and leader of the Belgian delegation in Durban, Yves Daelmans admits those results have stung.

“We went through the previous period, leading up to the latest IKF WKC in 2015, hosted in our own country, which was magnificent. At that tournament we saw some nice results, a large fanbase and a very good final with the support of King Philippe. However, we could not continue this success, obtaining some negative results during the recent World Games and IKF EKC.

“Through the past few months we have been building a new team. Their main goal is to do much better than we achieved at these most recent championships,” says Yves.

Will that motivation be enough to raise Belgium back to their habitual position on the podium, or will the encouragement that challenging teams will surely gain from seeing their previous invincibility undermined prove stronger? 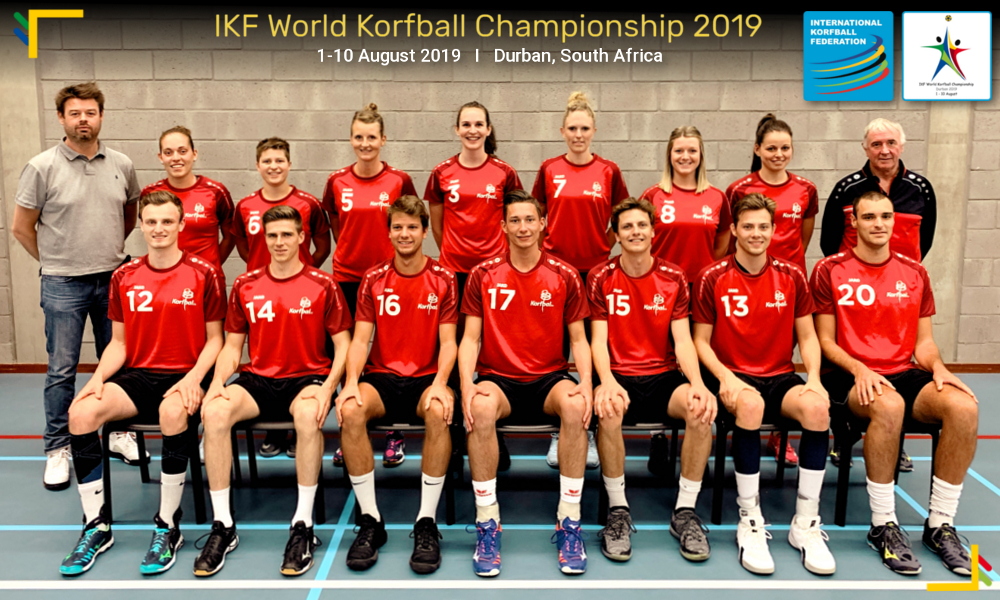 Yves says The Diamonds’ preparations started at the end of last year.

“First we participated in the Korfball Challenge in Rotterdam, The Netherlands, starting to rebuild the team. During the first quarter of this year the number of training sessions for the national team was relatively low. In Belgium during those months, all the focus goes to the intensive last part of the indoor championship, which requires our players to commit to multiple weekly training sessions with their clubs.

“As of April though, The Diamonds have been able to gather at least weekly for a series of trainings and matches against top teams in The Netherlands, and our training programme continues right through until our departure for South Africa,” he says.

That included a practice game against England on 20 July in Antwerp. More meaningfully, the two teams meet again in an official match in pool play on 3 August in Durban.

“With all respect to the other teams in our pool, Hong Kong and Slovakia, England is ranked closest to Belgium and that last game in the first round will the most interesting one for us. That will be where we can prove to ourselves, and everyone else, that we have moved on from our disappointing results of the past two years,” he says.

In June star player David Peeters retired from international korfball, so will not be wearing the famous red shirt in Durban. While they will miss him, Yves says the emphasis now is on the whole team.

“Nowadays the way we play korfball puts a lot of importance on being the best at all positions on the pitch. That means no individuals are in the spotlight. Instead, the team performance is the key focus. Besides some familiar faces, the spectators will get to know some new attractive young players for whom this will be their first major championship.

“That is exciting for them, though most of them have already performed multiple times in national youth selections, from U17 up to U21, so they are not completely new to international korfball, and are very eager to go to Durban.”

Whether their passion, fighting spirit and the new emphasis on being one team is sufficient to redeem The Diamonds, and return them to global korfball’s top level, promises to be one of the most intriguing stories of the IKF WKC 2019.