New Australian generation striving to beat the challenge of distance

Australia arrives in Durban with the IKF’s number ten ranking. They have played at every IKF WKC since 1984, including 1995 when they narrowly missed out on the bronze medal. More recently, Australia won bronze at the IKF Asia Oceania Korfball Championships 2018 a year after securing a creditable sixth placing at the World Games 2017.

However, this tournament is part of a rebuild for Australian korfball, with only one player back from the World Games squad, and a new coach. Almost two decades after he started coaching Australia, Phil Sibbons stepped down following last year’s IKF AOKC. Tim Miller, whose playing career included the IKF WKC 1995, took over and started preparing his new squad in January.

“Our goal is to play an exciting brand of korfball that gives us the best opportunity to finish as high as possible in our pool. Ultimately, we want to continue to develop and to compete with those countries that have far greater access to regular international korfball than we do in Australia,” he says.

Distance is always the biggest challenge for Australian korfball development, both the distance to international tournaments, and the distance separating korfball communities within the country.

“South Australia is historically our main korfball region; ten of our current squad call Adelaide home, though the recent development of new korfball communities in New South Wales and Victoria sees three players from those states on the plane to South Africa. We also have one player based in London and another based in the Netherlands. Integrating them into our preparation programme is difficult. For example, for Ben Wallace and Lauren Charlton, our Newcastle players, traveling to prepare with the squad in Adelaide is a significant commitment. Their quickest journey is a train to Sydney then a flight to Adelaide, taking in total about six and a half hours, while the cheapest way would be a 16 hour car journey. As a reference, the flight time from Lisbon, Portugal to Moscow, Russia is five and a half hours.

“As a result, 30 July, in Durban, will be the first day our entire squad is together in one place. 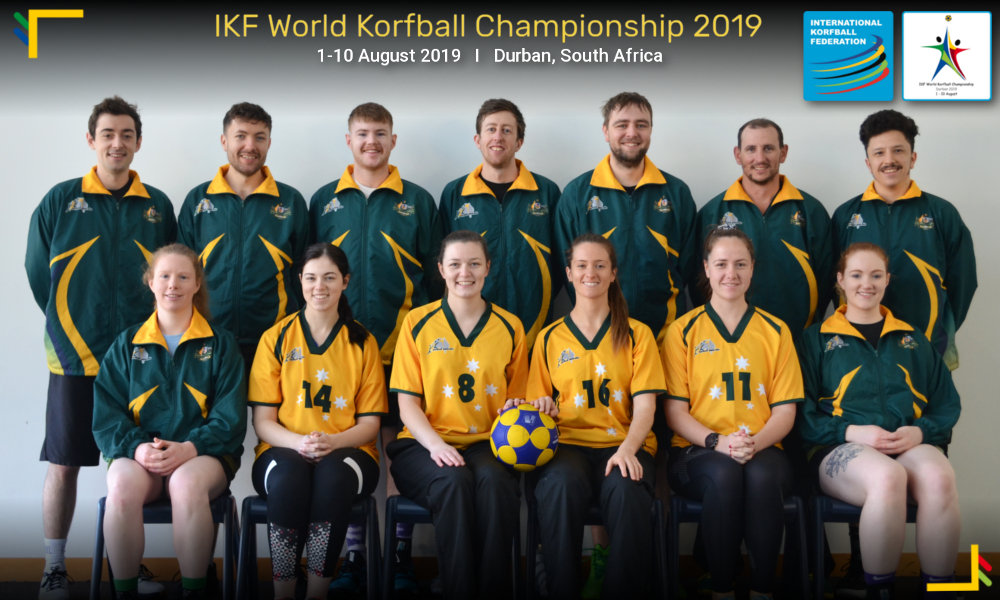 “All that effort is well worthwhile though, particularly for those based in New South Wales and Victoria, who will carry invaluable experience home with them to help progress their local korfball,” says Tim.

Family ties provide the threads that bind many korfball communities together. Australia is no different. Australia’s IKF WKC 2019 squad contains five siblings from two families: Andrew and Emily Hutchesson; and Lauren, Georgia and Nik Bungey, with the latter family having a particularly strong korfball heritage, as Tim explains.

“Sharyn and Bruce Bungey represented Australia in the very first Australian team. Sharyn played in the IKF WKC of 1984, 1987 and 1991. Bruce coached Australia in 1987 and 1991, and then again in 1999, having refereed in the 1995 event. Sharyn is also our squad manager for this tournament. Having Lauren, Georgia and Nik in our squad is another chapter in the story.

“Siblings in the team is a common occurrence for Australian korfball. At the IKF U23 AOKC 2015 we actually had four sets of siblings representing Australia,” he said.

London-based squad member Tamika Zilm also has a strong Australian korfball lineage, with her father Mark playing international korfball in the past, as well as serving at the Korfball Australia chair.

Tim is looking forward to seeing Jeffrey Vlietstra settle in. Born and based in the Netherlands, where he plays for KV Viko, Jeffrey’s mother was born in Australia.

“Jeffrey brings a wealth of korfball experience that his new Australian teammates are keen to share,” says Tim.

Adding Jeffrey’s experience to the mix will be part of the fun for Tim in Durban.

“Like every other team, we want to secure the highest possible ranking. Margins can be fine at the WKC, with the difference between finishing top eight, compared to a much lower final placing, difficult to determine. I know my players are fearless, support each other to the end, and know how to enjoy themselves. I’m sure we will play with pride, and leave the tournament with smiles on our faces,” he says.

The IKF Athletes Committee is asking all athletes that have participated at IKF events since August 2019 to give their feedback!…
#TheTeamFiles: Suriname (IKF WKC 2019)