The opening game of the 49th edition of the IKF Europacup showed no suprise. It had to be said that the Turkish team has made some progress but this was surely insufficient for the Trojans to worry about.

Second match of the day promised to be a clash between he champion teams from Germany and Catalonia.

The match had all a spectator could hope for. Many goals, quick movements and much emotion. With 12′ to go no one could predict the outcome of this game. A magnificent German buzzer shot, the ball did not even touch the korf, followed by two succesful attacks reversed the situation with Schweriner now in the lead.

Not for long however. Vallparadis, determined not to let go, took over despite a yellow card for a female player. What a neutral crowd hoped for became inevitable, an equal score at the end (20-20) and a golden goal as a result. It took some time before the final whistle with both teams nervous to keep ball possession. Finally a long distance shot from the “yellow” Catalan player was decisive for the 20-21 victory.

In the first half the better chances were for the Turkish champion. This resulted in a comfortable lead at half time (6-2). Kocaeli was master of the rebound. Endinburgh put in a lot of effort but there was a clear lack of tactical structure.

Both teams played a very static game. Edinburgh managed more or less to close the gap not enough however to keep Koacaeli from a first victory.

Former coach Daniel De Rudder, on leave from the hospital today, must be proud.

A very slow game between two teams that clearly missed athletic skills. Schweriner, eager to deal with the deception earlier that day, was the best team. Bonson, still under the impression of recent developments in their country, just struggled to keep the gap as close as possible.The main aim of both teams will be the ranking in the coming days of the tournament.

Edinburg was not capable to ennoy the English opponents. There is still a long way to go to enjoy the spilt of the korfball community in Great Britain. Anyway the “best of two” between the French and the Scottish champion promises to be close games.

The French at half time already realised that this game was to consider as a training session for the struggle for the final ranking (1-19).

They must have enjoyed the opening ceremony where the IKF speaker expressed his compassion for what recently struck the French nation.

Due to internet bandwith problems during Day 1 that didn’t allow live web streaming, we recorded all IKFECup15 Day1 games. They are uploaded to IKF’s youtube channel. These problems will be solved in Day 2.

This are today’s results: 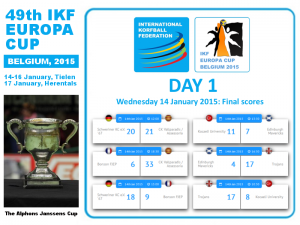 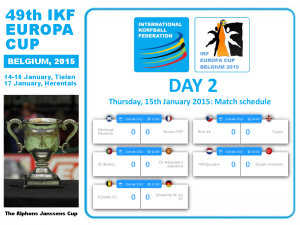 You can follow all the games and live statistics during all day in www.worldkorfball.org, and photographs and game results in IKF’s social profiles: facebook.com/korfball.org & twitter.com/korfball

These are some images from this first day of tournament, made by Marco Spelten. (www.facebook.com/ActiefotografieNL)

The current worldwide corona crisis is having a major impact on the complete sports world and unfortunately, korfball is…
IKF Europa Cup Booklet