For the second day running the Dominican Republic participated in a match where only one goal separated the teams. This time, however, they were on the wrong side of the score line losing to Poland 12 – 11. This meant a three way tie for 4th to 6th places in pool A. The mutual goal differences in the matches between the three teams placed Hong Kong China 4th, Dominican Republic 5th and Poland 6th. Chinese Taipei took top spot in the pool beating England 26 -14, Germany took second place by beating Hong Kong China 20 – 9 with England in 3rd place.

In pool B the Czech Republic, after their heartache yesterday, needed to beat China by three goals to not only produce another three way tie but also to become the highest ranked and this they did. From a level 14 – 14 score line at the end of Q3 two bursts of goal scoring opened up a five goal lead that the Chinese could not peg back and the Czechs finally ran out 21 – 18 winners to finish 2nd in the group. China finished 3rd and Hungary 4th. Turkey finished 5th by virtue of their win against South Africa yesterday, losing today 16 – 21 to Hungary. The top team in the group, the holders the Netherlands won 50 goals to 8, an incredible aggregate score given that there was only 40 minutes of actual playing time.

The semi-final ties are, therefore, Chinese Taipei vs Czech Republic; Germany vs the Netherlands; England vs Hungary; Hong Kong China vs China; Dominican Republic vs South Africa and Poland vs Turkey. 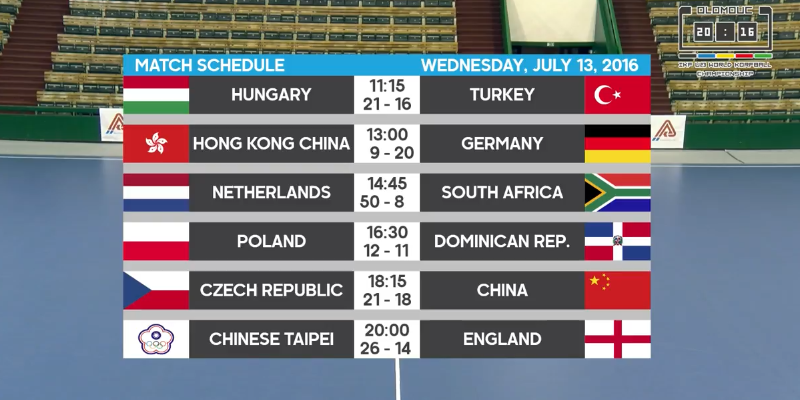 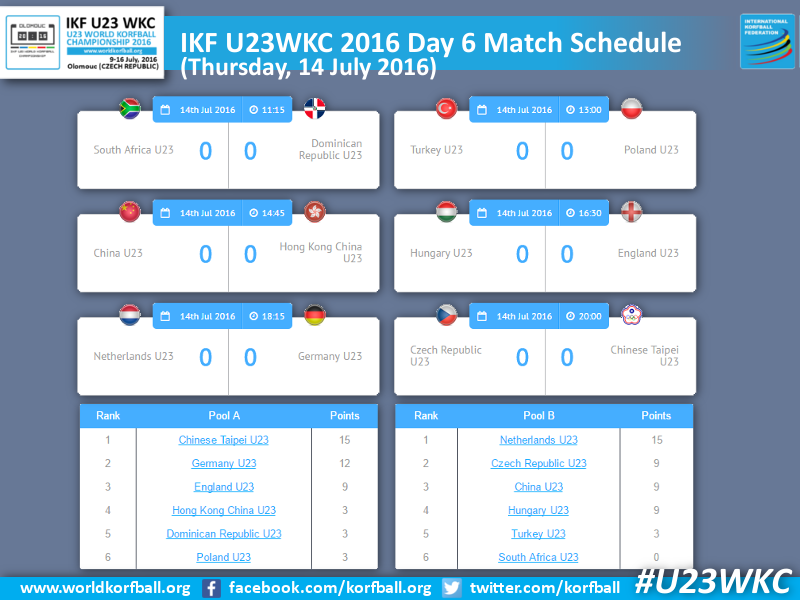 Here you can find some highlights video from all days in IKF U23WKC 2016 provided by Český korfbal / Czech Korfball (LOC): https://www.youtube.com/watch?v=fcwRtMY-BM0