IKF President Jan Fransoo has been awarded the Wilson Honorary Trophy by the Royal Netherlands Korfball Association KNKV. The trophy was presented to Mr Fransoo by Rob Meijer, KNKV President, at the organization’s General Assembly earlier today in Arnhem (Netherlands).

The Wilson Honorary Trophy recognized contributions to the development and promotion of korfball. It is the oldest existing korfball trophy in the world, and has been awarded annually by the KNKV since 1937. The award is named after S.A. Wilson, President of the Royal Netherlands Korfball Association from 1934 until 1946. Between 1946 and 1954, he also served as President of the International Korfball Federation. 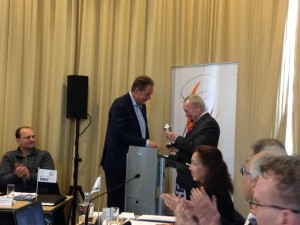