The IKF World Korfball Championship (WKC) 2019 is getting closer and closer. Today, we announce the tournament set-up and the pool draw criteria.

The 20 participating countries start playing in five pools of four countries. The top three of each pool and the best number four qualify for the round of 16 and stay in the race to become the World Korfball Champion 2019. The remaining four countries will be playing against each other in a round-robin system, with a final at the end, to determine their position in the final ranking (position 17 – 20). The exact match schedule after the group stage will be announced closer to the draw in April.

The best number four will be decided following the rules stated in the IKF Competition Regulations (*), which state that the points earned by each team shall be decisive. In case these points are equal, the goal difference shall be taken into account. If teams are still equal after this, the goals scored by each team shall be the final decisive factor. (*In the case multiple teams end up with the same number of points, the scores against the pool leaders will be taken out.)

To decide the line-up of the five pools, an open draw will be conducted. This draw will be held during the IKF U19 World Korfball Championship in ‘t Kalverdijkje, The Netherlands on Saturday, April 20th at 14:00 o’clock. For the draw, the 20 participating countries have been divided into four pots.

The draw criteria as decided by the IKF EXCO are:

The draw can be followed live through the IKF YouTube channel.

With just over 6 months to go before the start of the IKF World Korfball Championship (WKC) 2019 in Durban South Africa, held from 1-10 August, the South African Korfball Federation has launched the WKC event logo.

The launch of the event logo initiates the start of the communication campaign towards the IKF WKC 2019. So from now on it is recommended to carefully watch the IKF Social Media Channels.

The first communication that can be expected from the side of the IKF is the official confirmation of the 20 participating countries in South Africa, in the beginning of February. Before the end of the same month also the announcement of the tournament set-up will be shared, including the pool draw procedure and pot composition.

The WKC pool draw itself shall be done publicly and will be conducted during the IKF Under 19 World Korfball Championship from 19-21 April in Leeuwarden, The Netherlands. The exact date and time of the draw will be communicated at a later stage.

Next Saturday July 7th, the IKF U21 World Korfball Championship 2018 will start in Budapest, Hungary. Eleven teams will compete during 8 days in this 1st IKF U21 World Championship in the spectacular Tüskecsarnok Arena. Don’t miss this great tournament and watch it live on www.worldkorfball.org (live games, statistics, top scorers,…) 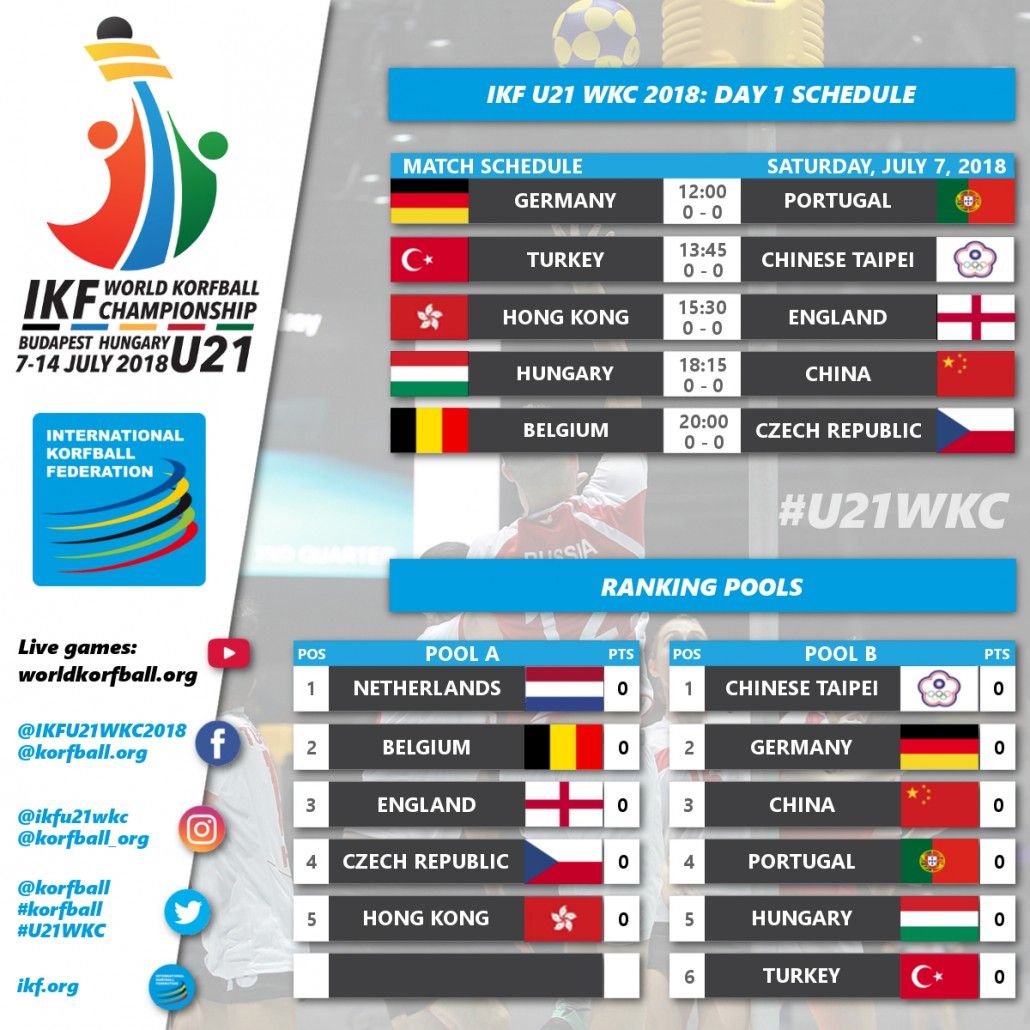 The semi final matches in the 10th IKF World Korfball Championship are Thursday 5 and Friday 6 November in the Lotto Arena in Antwerp, Belgium:

The pools and matches are: