The team of Chinese Taipei is the IKF Asia Korfball Champion after beating Hong Kong China in the final with a remarkable 39 – 14 score.  Chinese Taipei underlined their strength in this 4th IKF AKC in Jaipur, India. Hard work and determination pay off. The other Asian countries have work to do to bridge the gap with Chinese Taipei.

Referee in the final was Ding Ma Martin from China. 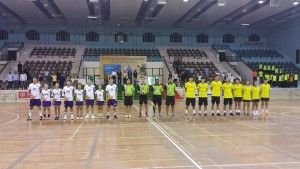 In the bronze medal match China beat the home team from India by 17-16. China was trailing the home team for most of the match. At half time after 20 minutes the score was 6-10 in favor of India. After 27 minutes the biggest gap in scoring was 10-16. From that moment the Indian scoring machine failed to be successful and China came closer and closer. Only 3 minutes before the end the Chinese team for the first time in the match equalized the score at 16-16 by topscorer Ding-Xin Wang with 6 goals. The final 17th score came from Liang Zhang. China earned the bronze medal.

China in purple. India in blue. 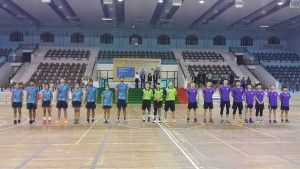 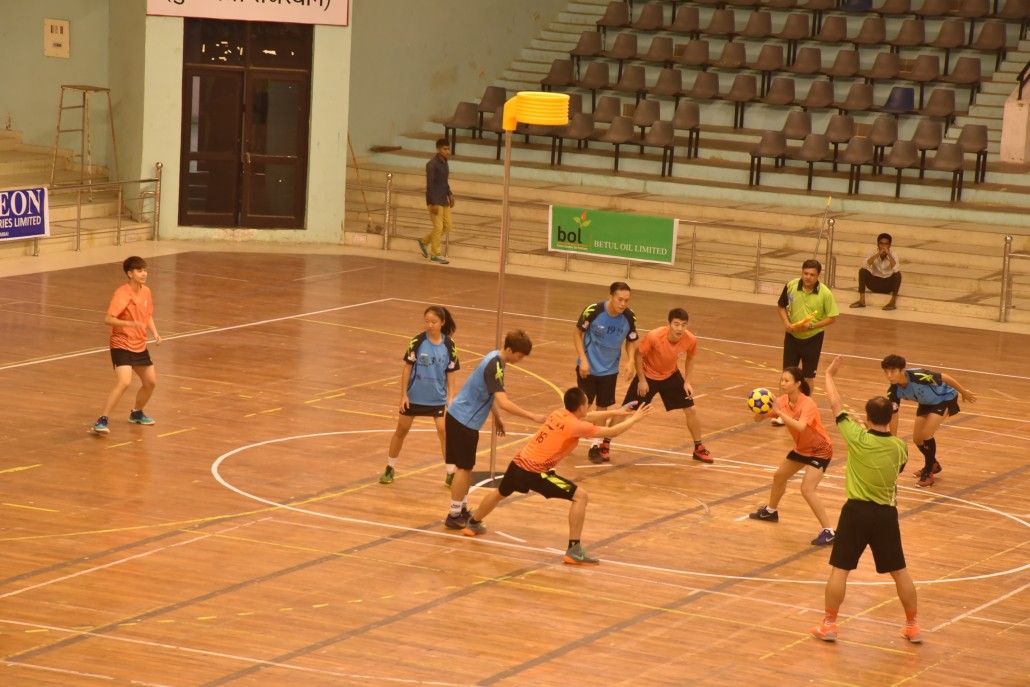 Third day of 4th IKF Asia Korfball Championship started with India against Sri Lanka. This contest was a one sided affair as India defeated Sri Lanka by 61-8. This was the highest scoring match of the tournament.

The afternoon session began with India up against Hong Kong China. India again started the match well at the initial stages but could not maintain the momentum for long. The score line at half time was 12-9 in the favor of Hong Kong China.

The match went neck to neck until the final whistle. The Indian shooters were again off the mark despite of very good rebounding particularly by Indian captain Pardeep Dahiya, they had a very low conversion rate whereas in contrast Hong Kong China scored at almost every opportunity they got. The match ended with Hong Kong China defeating India by 19 goals to 17.If India had won the match China would have qualified and this would have ended Hong Kong China’s hopes of reaching the finals. The player of the match was by far Wing- Yan Cheung who also was the top scorer of the match with 9 goals. Aditya Nandal scored 5 goals for India.

The last match of the day was also the last for Sri Lankan’s as the places for finals and third place match were already decided. Nonetheless it was a valiant effort by the team from South Asian Region. They enjoyed being a part of this tournament as this was their first International appearance. The score line after the match read 29-8 in the favor of China. Top scorers of the match were Yin-Zhou and Farnendo Dilip with 6 and 4 goals respectively for China and Sri Lanka.

Today the teams placings for finals and 3rd place position were decided.

Tomorrow the first match will be played for the bronze medal between China and India at 05:30 GMT and later on at 07:30 GMT the Asian Champion for the fourth edition IKF AKC will be decided between Hong Kong China and Chinese Taipei. 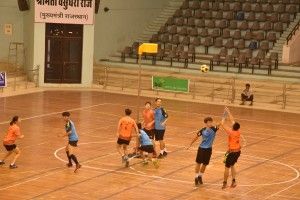 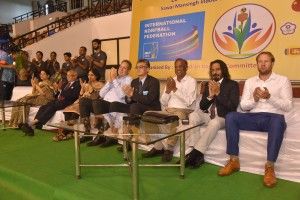 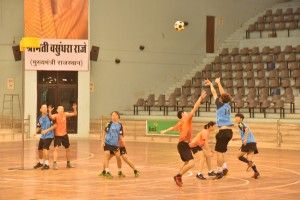 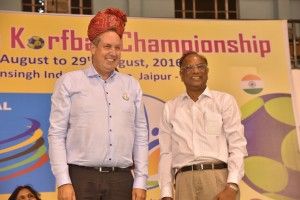 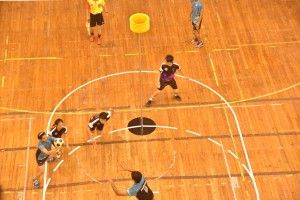 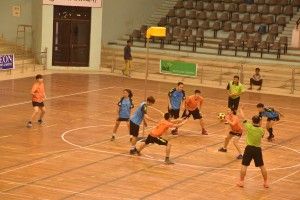 DAY 1
The host nation played their first match against the reigning Asian champion Chinese Taipei. The defending champions took no time as they opened the scoring in the very first minute of the match. Chinese Taipei raced towards a 16-8 lead at the half-time. And going with the flow they finished the match 21-12. The top scorers of the match were Shu-chi Chang for Chinese Taipei and Pardeep Dahiya for India with 5 and 4 goals respectively.
In the second match of the day Hong Kong China played the debutant team Sri Lanka. The experienced team sailed past the Lankans with the score line reading 30-1 in the favour of Hong Kong China.

DAY 2
There were 4 matches scheduled. The morning session began with Hong Kong China up against China. China started the game brightly and made a nice lead of 5 goals in the 15th minute. Hong Kong China reacted and reduced the deficit to 2 goals at the half time. After the interval the game went neck to neck until the last minute. The scores were tied until the 31st minute. China had a golden chance to wrap the game moments before the final whistle but they missed a penalty. The game finished 13-13 after full time. The match went on in Golden Goal, Tsz Fung LUK of Hong Kong China scored the golden goal. The match ended 14-13 in favour of Hong Kong China.
In the second match of the day Chinese Taipei had no difficulty defeating the new comers Sri Lanka. The match ended one sided with the score line of 38-9 in the favour of Chinese Taipei.

The formal opening of the tournament also took place on Saturday. The Chief Guest was IKF President Dr Jan Fransoo and the Guest of Honour was Honorary Life Time President of IKF Asia Mr M.C. Gupta. There were many dignitaries present at the function, Dr. Inglish Huang, IKF Asia President, Mr Tilbert La Haye, CEO IKF and Dr. Pramod Sharma, Co-chairman IKC were some who graced the event with their presence. The chief coordinator of the ceremony was the IKC Chairman Mr Dilip Kumar.
Another highly significant match of the day started with the hosts India up against their counterparts China. India started well and took a quick lead of 3 goals. Scores at the half time were 7-5 in favour of India. China took no time in responding in the second half and gained a 1 goal lead at the end of the 3rd quarter with the score of 10-9 in China’s favour. The score line read a little against the run of play as India were dominating the match. The 4th quarter was a total one sided affair as China gave the hosts no chance to get back in the match. The score line ended 15-10 in favour of China.
In the last match of the day the defending champions were up against Hong Kong China.
This was the second match of the day for Taipei and they made no fuss about it as they strolled past Hong Kong China with a score line reading 27-9 in favour of Chinese Taipei.
The top scorer of the match was Ken Lin from Chinese Taipei with 6 goals.
The day ended with exciting matches and the biggest moment of the day was the Golden Goal match.

You can follow all games play-by-play, all the results, with statistics and scorers on www.worldkorfball.org.
For more photos and images visit www.facebook.com/AKCJAIPUR 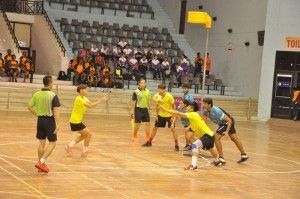 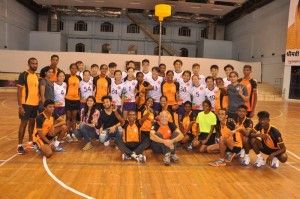 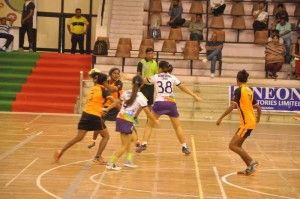 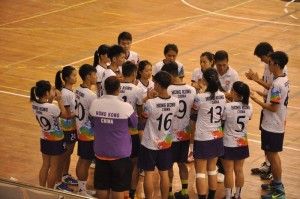 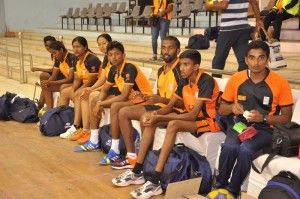 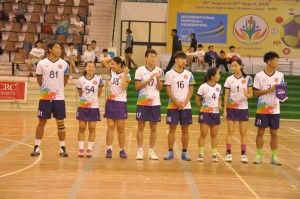 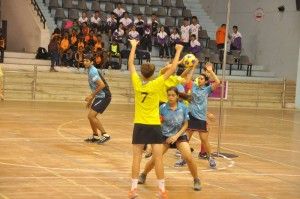 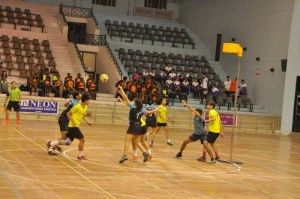 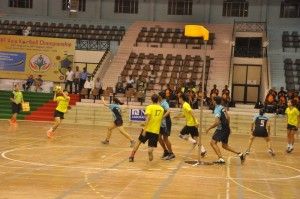 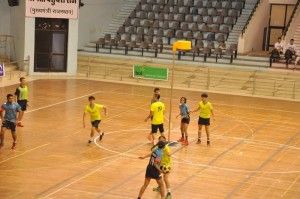 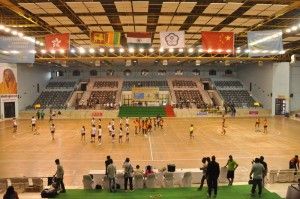 The IKC (interim committee) is the organising body.

The IKF AKC registration phase is closed. The match schedule is published. 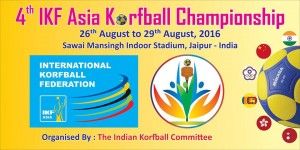 IKF Asia and the IKC (interim committee) have done their utmost to organize a good event.

Five teams compete to become the next Asian Korfball Champion.