Today the International Olympic Committee (IOC) President Thomas Bach attended the opening match of the Korfball competition between Belgium and Germany at The World Games in Birmingham, Alabama, USA.

The match was won by Belgium who beat Germany with a scoreline of 26-9.

While today is the first time that Thomas Bach has watched a top level international korfball match, it is not Mr Bach’s first playing korfball!

At the #OlympicWeek in Lausanne, Switzerland the IOC President took part in a korfball demonstration match with athletes and young people.

Promoting gender equality, both on and off the field of play is a priority for the IOC, who have taken increasing actions in recent years to advance gender equality throughout the whole Olympic movement.

During the 2017 edition of The World Games held in Wrocław, Poland the IOC Sports Director Kit McConnell also took up the opportunity to watch the World’s only mixed-gender team ball sport played at the highest level.

We are delighted with the continued focus and support from the IOC and International World Games Association (IWGA) to korfball. Did you know every edition of The World Games, the IOC Sports Director and/or the IOC Olympic Games Executive Director have attended the korfball competition!

While President of the Belgian Olympic Committee, Jacques Rogge, previous IOC President attended the IKF World Korfball Championship in 1991. A year that is famous when Belgium won Gold for the first time in their history. 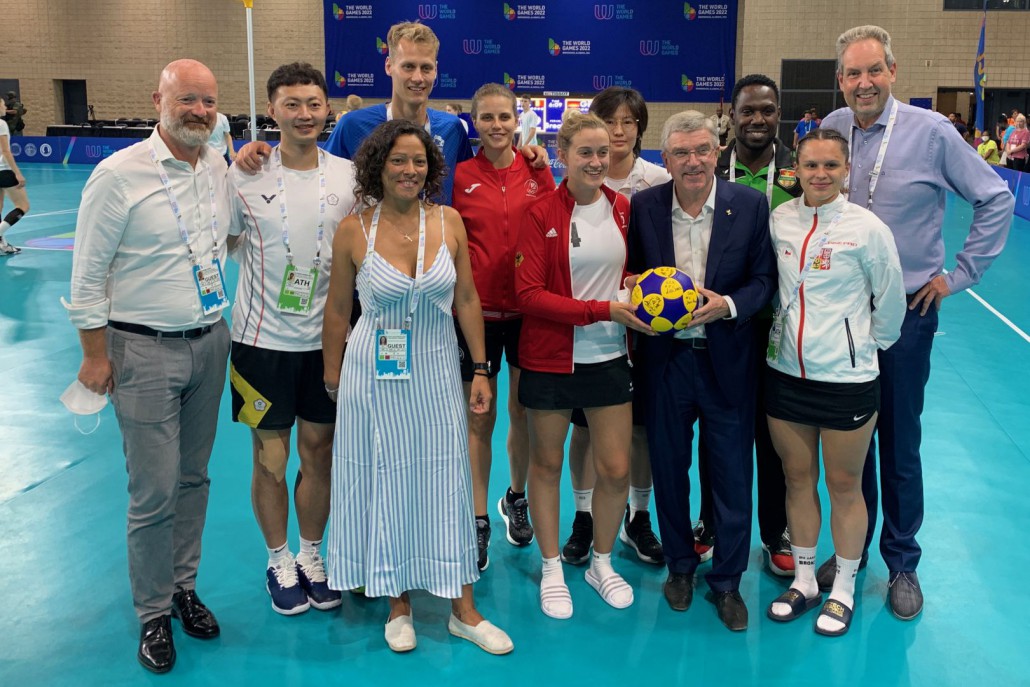 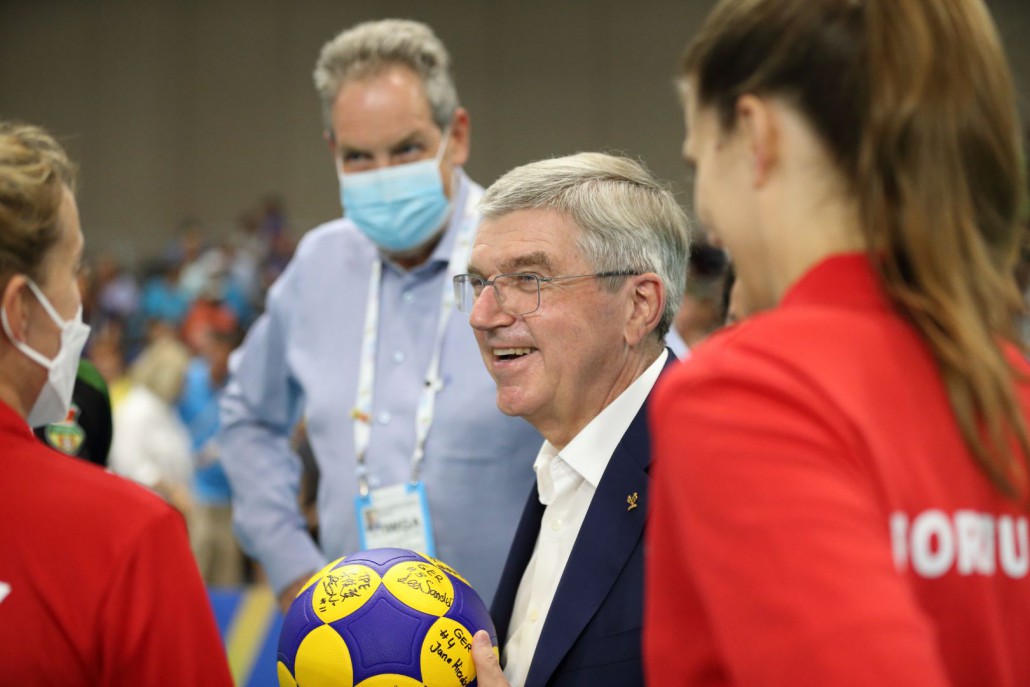 The Korfball competition at The World Games 2022 takes place between Wednesday, July 13 to Sunday, July 17 at the  Birmingham Jefferson Convention Complex in Birmingham, Alabama, USA.

For the latest information from The World Games search online using the hashtags #WeAreTheWorldGames #TWG2022 #Korfball.

“The Olympic Channel provides a platform for the promotion of all sports and athletes within the Olympic Movement,” said Mark Parkman, General Manager of the Olympic Channel. “We look forward to working together to help expand the reach of these sports and events through the creation and distribution of content targeting a worldwide audience.”

“The IKF will further increase awareness for korfball, as multi gender team sport, in the world of sports and within the Olympic Movement. We are keen to cooperate with this platform and distribution channel”, mentioned Frans Walvis, IKF Senior-Vice President.

In addition to collaborating on live events, the Olympic Channel actively works with its federation partners to present event coverage, highlights, magazine shows, news coverage and original programming providing an additional platform to distribute content that are complementary to current broadcast and distribution arrangements.

The Olympic Channel is a multi-platform destination where fans can experience the power of sport and the excitement of the Olympic Games all year round, and is available worldwide via mobile apps for Android and iOS devices and at olympicchannel.com.

About the Olympic Channel

The Olympic Channel is a multi-platform global media destination where fans can discover, engage and share in the power of sport and the excitement of the Olympic Games all year round. Offering original programming, news, live sports events and highlights, the Olympic Channel provides additional exposure for sports and athletes 24 hours a day, 365 days a year in 11 languages. The Olympic Channel was launched in August 2016 in support of the IOC’s goal, set out in Olympic Agenda 2020, of providing a new way to engage younger generations, fans and new audiences with the Olympic Movement. Founding Partners supporting the Olympic Channel are Worldwide TOP Partners Bridgestone, Toyota and Alibaba. The Olympic Channel is available worldwide via mobile apps for Android and iOS devices and at olympicchannel.com

About the International Korfball Federation

The IKF is the korfball sport governing body since 1933. The IKF has 69 member countries all over the world; in Africa, Americas, Asia, Europe and Oceania.

Korfball is unique over 85 years as mixed gender team sport.

Korfball is program sport in the World Games ever since 1985.

LAUSANNE (19/4/2016) The International World Games Association (IWGA) and the International Olympic Committee (IOC) agreed on a new Memorandum of Understanding on Tuesday. IOC President Dr. Thomas Bach and President José Perurena of the IWGA signed this important agreement about mutual support during the SportAccord Convention in Lausanne. This document supersedes the previous Memorandum of Understanding dated 27 October 2000.

The MoU underlines the closer cooperation between the IOC and the IWGA which was set out in Recommendation 6.1 of Olympic Agenda 2020. This states “…the IOC and the International World Games Association (IWGA) to closely cooperate regarding the sports programme composition and their respective evaluations.” The new agreement confirms that “the IOC recognises the importance of The World Games as a multi-sport event and the IWGA is committed to develop its activities in the Olympic spirit and in conformity with the Olympic Charter.”

The MoU explains the principles of how this overall cooperation can be further developed. One of these principles is that the IWGA accepts that only events that are not on the programme of the Olympic Games can be included in the programme of The World Games (TWG). The IWGA shall also ensure that only sports whose International Federations are recognised by the IOC or are already members of the IWGA will be included in the official sports programme of TWG.
The IOC agrees to grant patronage to Organising Committees of The World Games and to provide technical assistance. This means for example that the IOC and the IWGA shall explore possibilities of closer cooperation on their respective communication, promotion and marketing programmes. Furthermore, the IOC will provide its expertise and help to promote IWGA’s activities within the Olympic Movement and encourages the NOCs to support and assist their national multi-sport delegations taking part in TWG.

Part of the agreement signed on Tuesday is the assurance: “The IWGA shall continue to develop a close working relationship with the World Anti-Doping Agency (WADA) to facilitate education and testing programs, and doping controls conducted at The World Games according to the World Anti-Doping Code.”

IWGA President José Perurena said after the signing ceremony: “This Memorandum of Understanding tremendously enhances the status of The World Games. Working in cooperation with the IOC is essential for us to raise the level of competition and organization of our Games. I want to thank IOC President Dr. Thomas Bach for his enormous support and for working with on this document. It proves that we are a real part of the Olympic movement and a member of the Olympic family.”

Mr Bach and Mr Walvis showed their sportmanship and the other players from Switzerland and the Netherlands coached by former Dutch record international Mr Leon Simons were enthusiastic as well.

Korfball will be featured as part of the program of the Generation Games from 11-15 October in Lausanne, the Olympic Capital. The Games are organized in collaboration with the International Olympic Committee and the City of Lausanne to engage Lausanne citizen in a healthy lifestyle.

The Generation Games organisation is a network of professionals in the field of sport, communication, creative concepts, design, events. The organization works together with several organisations, schools, Universities and internationally operating institutions that share the conviction regarding the importance of stimulating a healthy lifestyle for all ages, through this intergenerational sporting event.

Through this cooperative, cities organising an edition of the Generation Games receive all relevant advice and support. The actual organisation of each edition is the responsibility of a city, based on the concept of the event and guidelines that are provided. Each edition is the result of international co-creation and inspiration. 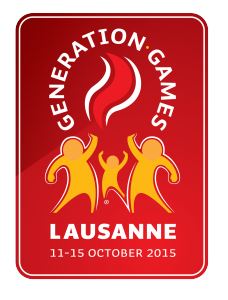