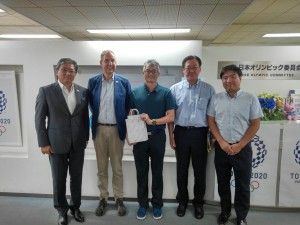 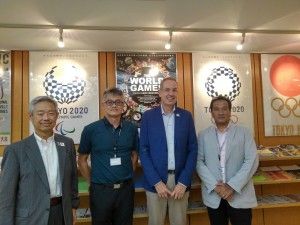 Picture: Morooka, Huang, Fransoo, and Furusuka in the Office of the JWGA

In the meeting with the Japanese World Games Association, Secretary General Tom Furusuka welcomed the JKA to be a member of the JWGA, joining many other World Games sports to join formally the sports governance structure in Japan. Mr Furusaka, Professor Morooka, and Mr Tobisa agreed to soon arrange the application documents since the JKA meets all requirements.

The next IKF AOKC – IKF Asia Oceania Korfball Championship – is awarded by IKF Asia and IKF Oceania to the Japanese Korfball Association.

The event will be played in Saitama, located north of Tokyo.

Update 16 July: 10 National teams from Asia and Oceania will be in competition.

Within Japan, Professor Ebashi is recognized as the First President of the National Institute of Sports Science in Kanoya, He died on April 8 at the age of 97.

The IKF remembers Professor Ebashi with the greatest respect and appreciate him for laying the foundation of korfball in Japan.