The FISU announced the 35 host cities for the 2018 FISU University World Championships. As of 2018 korfball is part of the FISU Calendar.

This follows the first test event in 2015 in England and the very positive evaluation by the FISU / IKF afer the event in April.

The 2018 FISU University World Korfball Championship is awarded to Vila Real, a city in the north of Portugal.

The results and the matches planned can be found under: IKF UKWC Matches; click here.

The second day is underway. 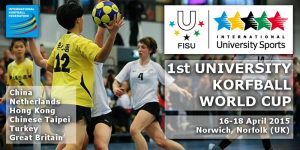 The IKF University Korfball World Cup starts today. You can follow the matches on your Pc, laptop, tablet or smartphone.

Click HERE to go to the direct connection between the jury table in the University venue in Norwich, England and the IKF match database and follow all matches.

The – free of charge – World Korfball app shows all matches as well.

All match times published are in the London summer time zone.

This event is patronised by FISU.

In almost one week time the IKF, the English Korfball Association (EKA) and the Local Organising Committee will welcome the eight competing teams in Norwich (England) at the “IKF UKWC 2015 patronaged by FISU” event.

We bring you up to date the final pools + match schedule + timings.  The IKF UKWC event is:

Due to the late Russian withdrawel, luckily replaced on very short notice by NED 2 (thanks to KNKV), based on above mentioned criteria and review by the IKF Competitions Committee the IKF CC jumped to the conclusion to change from drawing pairs into the snake-procedure. Following the snake-procedure and the above mentioned criteria the IKF CC decided on the pools A and B. The IKF UKWC pools and match schedule is filled accordingly; IKF UKWC 2015 Pools + Match schedule; click here.

The IKF has to change the pools and the match schedule of the first University Korfball World Cup. This event is patronaged by FISU. The reason for these changes is the late withdrawal (visa related issues) of Russia.

The Netherlands 2 participates to complete the eight university from all over the world.

The International Korfball Federation announces the IKF University Korfball World Cup 2015, patronaged by FISU as test-event being held in Norwich, United Kingdom at the University of East Anglia.

This event with 8 national university teams will take place from 16 – 18 April 2015, pools below:

Dr Jan Fransoo, IKF President, stated: “With ten teams from five countries in the very first event, this promises the concrete innovation of a very long and growing series of University Events in Asia. I am hopeful that this may eventually lead to the inclusion of korfball on the program of the Universiade World Student Games 2017 in Taipei. I would like to thank NTUE, and in particular its President, Professor Shin-Jen Chang, for the continued support provided to the Asian korfball community over many years. Congratulations to Professor Chang for being the first host in this important event.”

The innovative IKF Asia University Korfball Championship (AUKC) held in Taipei from 14 to 18 August 2013 was successfully co-organized by IKF Asia, Chinese Taipei Korfball Association and National Taipei University of Education (NTUE). This event was the first official tournament of IKF Asia since she has been established in 2011. The goals of 1st AUKC are to stimulate the development of university korfball in Asia to result in the inclusion of korfball in the competition program of 2017 Summer Universiade in Taipei. The participation of ten teams from China, Hong Kong, Korea, Macau, and Chinese Taipei let IKF Asia take an inspiring step closer to the goals.

The local organizing committee provided live web-broadcast throughout whole the tournament and the films can be reviewed on http://irobot.ntue.edu.tw/ELectronics/101/2/GP4/2013AsianUnivKorfballCham/Asian_Univ._Korfball_Cham._2013_ya_zhou_da_xue_he_qiu_sai.html

After 33 intense korfball matches the ranking is: