Today (Saturday, Jul 16, 2022) we welcomed into the korfball arena at The World Games in Birmingham former international players from the United States Korfball Federation (USKF) who won Bronze at The World Games 1985 in London, Great Britain.

The USKF 1985 medal winning squad were today each presented with a Recognition of Achievement certificate from the International Korfball Federation.

The USKF was founded in 1975 by Paul Kempff. Current President of USKF, Carl Yerger said: “Our priority now is to support passionate people to play korfball…. Our strategic goal is to support pockets of korfball by fostering it and encouraging its growth” 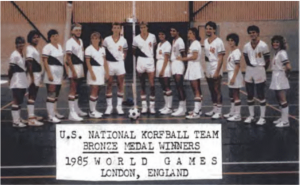 Team USA qualified for the next two World Games in 1989 and 1993, finishing in 5th place in both. 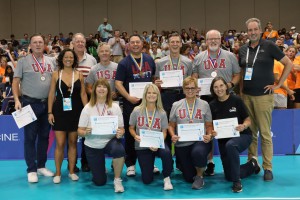 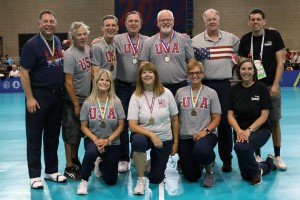 Korfball in the USA

Pacific Northwest (PNW) Beach Korfball is the 1st beach korfball club in the USA, founded by a group of basketball players lead by Bill Johnson, based at Golden Gardens Park in Seattle, Washington

PNW Beach Korfball will be representing the U.S. in the first ‘IKF World Beach Korfball Championship’ in Nador, Morocco on 19 & 20 August 2022 in their first official game.

Bill Jonson from PNW Beach Korfball said “We are taking things slowly at a pace that’s manageable for us. We would like to let it grow organically & naturally, and make things sustainable. We are now making connections with korfballers all over the world. Eventually, we will make Seattle a nice place to play beach korfball”.

“While the Olympics is moving towards mixed-gender sports, the coed aspect of beach korfball is the new dynamic that’s going to make social changes with sports like this, I feel cool to be part of korfball”. Ashley Graham.

Find out more about Korfball in the USA by visiting the United States Korfball Federation website.