Zimbabwe beat South Africa yesterday for the first time in history in an official senior match (17-13), but is still headed to retain their African Championship title today as both Zimbabwe and South Africa face Zambia, which so far has lost all matches by a large margin.

On Friday, South Africa had beat Zimbabwe 20-16. Consequently, in their mutual result the teams were even in wins and in goal difference, so the decision on the ranking has come from the team scoring most goals in the winning match (South Africa scoring 20 vs Zimbabwe scoring 17).

Zimbabwe especially impressed with their leading scorers Tatenda Mupanduki and Nqobizita Billy Melusi, while South African veteran Werner Basson, who completed his 50th official international match for South Africa on Sunday, was decisive for their side.

If both teams do what they are expected to do today, South Africa and Zimbabwe will advance to next year’s World Championship in Durban (RSA). 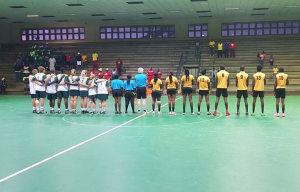 After a successful week with 30 participants from Zimbabwe for the coaching and referee course conducted by the Swan Fund chairman Theo Van der Linde assisted by Corrine Buckland, the tournament that would be decisive for places in the IKF WKC took a start with the match between the home team and Zambia.

A very athletic home team of Zimbabwe had no trouble to beat a courageous opponent.

Both teams, eager to start after long preparing work from the local organising committee, played nervously in the beginning and missed many good scoring opportunities.

But then Zimbabwe, due to the difference in length of the male players, was able to keep the ball for long periods in the attacking zone. As a result the number of shots had to end in a clear difference in score and at half time (10-1) Spectators understood that the match was played.

Many substitutions ordered by the coach of Zambia brought no relief in the second half and it was obvious that Zambia would never be able to challenge the opponent. The final score (19-5) was a perfect reflection of the game.

Those that left after the first match will regret their decision. The clash between the experience of RSA and the enthusiasm of ZIM was a spectacle.

But then the uncomfortable match schedule forcing Zimbabwe to play two matches in a row, physical effort lead to uncontrolled patterns and the emotion was insufficient to keep South Africa from strolling away from their opponents. (12-16 after 15′)

A number of unnecessary penalties would give RSA the luxury to control the game towards the end.

From the start of the second clash between the teams we saw good korfball with much speed and accurate shooting for a cheerful crowd to enjoy.

In the second period the home team could not maintain the tempo. Attacks would not last long because rebound was a problem.

South Africa became master of the game despite a serious injury of one of the key players.

In the third quarter we witnessed a revival of Zimbabwe. Another injury of a RSA player forced the coach to bring the first back in but as by wonder the team regained confidence (12-9)

Towards the end Zimbabwe had much ball possession but did not know how to make a profit out of it. There was no answer on the back defending of RSA until two long shots of the best attacker concluded the game.

Zambia with much goodwill could never disturb the opponent. Nearly half of the shots were defended which gives to think that there is a serious need for qualified instructors.

Werner Basson was highlighted because of his 50th appearance on the international scene. He again played a key role in the victory of his team. 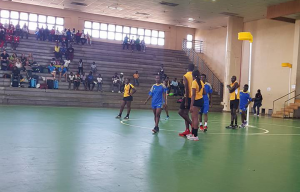 Because too many good opportunities were unsuccessful South Africa, too slow at that time, had trouble to create a gap.

In the second half Zambia made too many mistakes in defence and penalties for RSA did the rest.

The atmosphere was tremendous during this game with a cheering crowd, a speedy game and much scoring.

Although it was to be expected that Zambia would have problems to trouble the opponent, there was no walk over.

Rebound however, both from tall male and female players, allowing attacks to last long made it difficult for Zambia to keep the gap as narrow as possible.

Zimbabwe, with netball girls and basketball male players, became undoubtedly master of the game with an overall supremacy in attack and defence.

If this team can be kept together for the next world championship, many Europeans will have to play their best game to keep Zimbabwe out of the top 10!

In the margin of the tournament Mr. Les Williams stepped down as the continental vice president of Africa. Chris Theijse was elected as the new president. 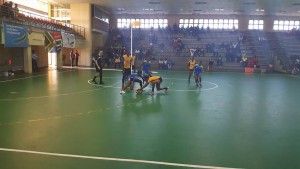 The IKF regrets to announce the passing of Mr Ruth Kool, bearer of the IKF Badge of Honour, at age 83 on 27 October 2022.…
Today starts the IKF All African Korfball Championship 2018