IKF President Fransoo (NED) was re-elected for a final term at the General meeting of the IKF in Durban last week. Fransoo, who six months ago announced that he intended to retire this Summer, was urgently requested by the nomination committee representing the membership to make himself available for one final term, in order for the nomination committee to identify a consensus candidate for his succession latest by the end of this final term. The current term will definitely be his last, as the General Meeting also adopted a proposed change in the Statutes  that will limit the maximum number of terms a member of the IKF Council may serve. 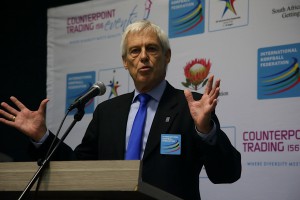 Frans Walvis was appointed as Honorary Member of the IKF

Ms Danielle Ruts (BEL) was re-elected for a final term. Following the General Meeting, the IKF Council also elected her to the position of Senior Vice-President. In that position, she succeeded Mr Frans Walvis, who did not stand for re-election after having served over three full terms on the IKF Council. Walvis was awarded the Honorary Membership of the IKF, following his extensive work on the development of korfball worldwide, both in his role as Member of the IKF Council and in his prior roles in the Executive Committee of the Royal Netherlands Korfball Association. 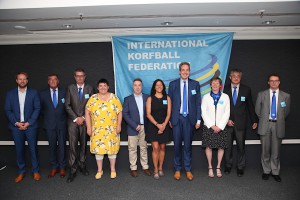 Ms Anita Derks (NED) was elected to the IKF Council. She will be a Member of the Executive Committee. With the election of Derks, the IKF Executive Committee is now fully gender balanced; an important objective for the world’s only fully gender-balanced team sport. Apart from Fransoo, Ruts, and Derks, the other members of the Executive Committee are Kevin Allen (ENG), Joana Faria (POR, currently also Secretary General), and Bjorn Elewaut (BEL). Following the rota of resignation, they are eligible for re-election in 2021. Among the Continental Vice-Presidents, Mr Chris Theyse (RSA) succeeded Mr Les Williams (RSA) as IKF Continental Vice-President of Africa, following his election as President of IKF Africa last year. 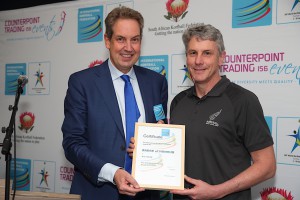 Apart from general business, at the General Meeting the President of Korfball New Zealand, Mr Rob Smith, received the IKF Badge of Honour, for his extensive work over 20 twenty years in developing korfball in Oceania (and New Zealand in particular), and his additional many volunteer work conducted for the international federation.

The International Korfball Federation is looking for new members for multiple IKF Committees. The IKF aims to spread korfball…
IKF awards 2023 WKC to Taipei and 2027 WKC to the Netherlands; EKC 2022 to the...