At the IKF General Meeting in Durban last week, the inaugural IKF World Korfball Awards were presented. Rather than distinguishing individuals, these awards recognize national federations.

The proposal to instate these awards was made by Korfball Sri Lanka. KSL Secretary General Pushpa requested why the IKF only has awards for individuals and not for national federations. He actually said that it would be very encouraging if national federations would be recognized at our General Meeting, and this could be in various categories such as grassroots development, and innovative actions. The IKF Executive Committee has taken over the suggestion and instated the awards. Five awards were presented.

Since being established in late 2017, KAT has undertaken significant development within Thailand and in the wider ASEAN region. In particular, their efforts to promote korfball during the Sport Accord Convention in Thailand in April 2018 were significant and generated valuable publicity. Moreover, they have immediately started an extensive school program, school competitions with dozens of schools taking part and coaching education. Apart from youth development, they have already taken part in international events in the U19 and U16 age groups, and in the university beach korfball championship. 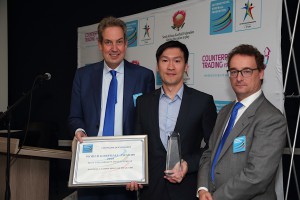 The award was presented by Kevin Allen, Member of the IKF Council aand Chairman of the IKF Development and Education Committee, to the Korfball Asssociation of Thailand. Since Prof Supranee Kwamboochan could not be present, the Chinese Taipei Korfball Association accepted the award on their behalf.

For the country who had the biggest development in the performance, reflecting in the world ranking increase and in a sustainable way. For this award, we consider the countries with the largest leap on the international ranking since 1 January 2018, when the new ranking method was introduced. Furthermore, out of the countries rising most, we add an assessment to what extent this improvement in performance is sustainable and reflected in the prospects of the next generation of players. 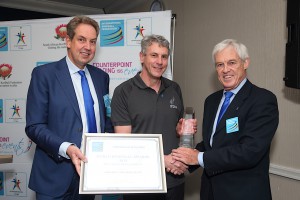 The Fédération Korfbal France have demonstrated a framework and culture of governance over the past two years through their early and responsive engagement with the IKF across all areas. The federation is always prompt with submission of entries and documents and payment of dues, including subscriptions. When the need arises, the French Federation contact the IKF early and with clear communication. Management and governance of the FKF follows demonstrates best practices. Fédération Korfbal France has been a professional and trustworthy partner for the IKF in hosting tournaments, balancing opportunity and risk to deliver events of high quality for the enjoyment of the participants and the benefit of international korfball. 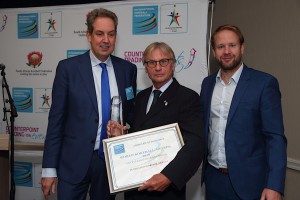 In the absence of the FKF at the meeting, Mr Tilbert La Haye, Chief Executive Officer of the IKF, presented the Award to Mr Frank Buvens, mentor of the FKF.

The IKF Open European Beach Korfball Championship 2017 was the first official IKF beach korfball tournament and it was more than just a competition, it was a real event.

It took place in a big beach stadium with an enthusiastic and professional organisation which determined the standard for the next IKF Beach Korfball events, with music, DJ, live announcing, videos, photographers, very good promotion, lots of spectators, a side-event tournament for local youth Beach korfball and great ambiance for the teams. 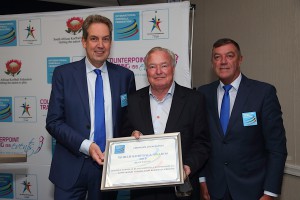 Mr Gert Dijkstra, IKF Special Delegate for competition matters, Member of the IKF Council, and Chairman of the IKF Competitions Committee, presented the Award to Mr Rob Meijer, President of the KNKV.

Korfball players and fans, like anyone else in the world, have been using social media for quite some time. However, within korfball there have been very few that have used social media strategically at an institutional level. England Korfball is one of the few exceptions. While much of the social media related to korfball is very much targeted at those within our community, England Korfball has consistently targeted to connect and reach out to those outside our community, relating strongly to other British and English sports, and to events and issues in society at large. In that respect, the recognition it has received is outstanding, and the reach of korfball messages is well beyond the thousands that are reached if we keep within our community. An example of this is the reach of this year’s England Korfball Finals, that had an extensive reach across English social media in the hundreds of thousands. 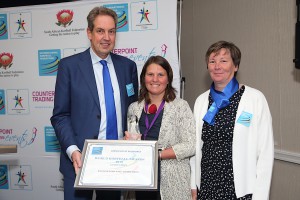 The International Korfball Federation is looking for new members for multiple IKF Committees. The IKF aims to spread korfball…
IKF General Meeting 2019: President re-elected, changes in the Council, and...

Never ending story of Korfball Development continues in Thailand with the persistent...
Scroll to top