The International Korfball Federation and Eyecons, a major innovator in OTT solutions, today announced at the World Korfball Congress in Durban, South Africa, to have agreed on a common path towards establishing a single worldwide Korfball Channel. In the channel, IKF competitions will be live streamed to a global audience. The initiative builds on the strong past performance of the IKF streaming its competition in professional-quality high-density video, grounded in the massive collaborative and volunteer culture that is characteristic of korfball. 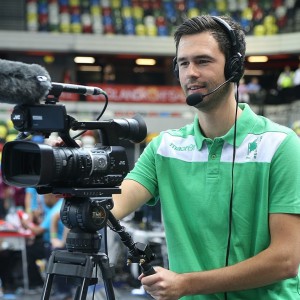 In the new platform, worldwide korfball will have access to live streams and archived material of the IKF and the Netherlands Korfball League. Moreover, supportive material will be developed linked not only to elite competitions, but also developing new content building on korfball’s key value of equality. The platform will have a separate portal for the international matches and the Korfball League matches. The intention of the Korfball League is to further grow not only the domestic market in the Netherlands, but also the international market as the number of international players in the Netherlands league is growing. The IKF further announced its intention to open up the platform to leading leagues of other countries, in an effort to serve the global korfball fan from a single platform.

IKF President Jan Fransoo: “This is a major step towards connecting to our global fan base, and we expect to be able to serve them better. We are proud to be working with Eyecons to leverage the power of our volunteer expert production with their expertise in developing and marketing such a platform. I am especially happy with the excellent collaboration with the KNKV and the clubs in the Netherlands with the intention to create such a common platform.”

KNKV President Rob Meijer, not a partner in today’s announcement, but a key partner in the further media strategy of the IKF, commented: “Together with our clubs we have been growing the Netherlands Korfball League’s exposure significantly over the past year, both in traditional and new media. We are happy that the IKF has been joining the same journey with us towards a single platform, and their commitment to remain aligned with us.”

Eyecons Managing Director Karl Breukink: “The vision and the innovation within korfball is an example for many other sports. The highly professional quality of the volunteer-produced korfball live-streams are fundamental to the further professionalization and thus international growth of korfball. We look forward working with the IKF and to achieve our mutual goal to create an engaged korfball fan base.“

The IKF is proud to announce that its Erasmus+ Sport 2021 application has been selected for funding by the European Commission.…
IKF WKC 2019 Day 7: Updated reviews, images & videos