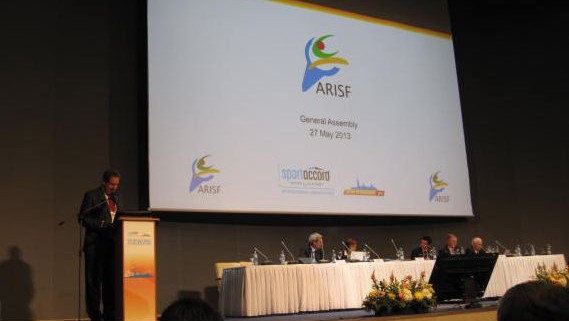 IKF President Jan Fransoo today stepped down from the Presidency of ARISF, the Association of IOC Recognized International Sports Federations, after serving eight years as highest elected official in the 33-Federation strong body. In a contested election, Italian Mr Raffaelle Chiulli, President of UIM (Powerboating) was elected as new President, beating the other candidate, Mr Carlos Freitag (President of WDSF – Dance Sport). After being elected, Chiulli proposed to the General Meeting that Jan Fransoo be promoted to President Emeritus. As such, he will keep a (non-voting) seat on the ARISF Council.

Fransoo was praised extensively for the work he had done for ARISF over the past years, both by many of the International Federations, but also by the IOC Sports Director Mr Christophe Dubi and the WADA Executive Director David Howman.

Fransoo announced late last year that he would be stepping down at the end of his term, wanting to spend more of his sport administration time on development of korfball and the IKF. After the meeting, he commented to be relieved that the transition has now started and he will be able to get more focus into his activities.

The IKF regrets to announce the passing of Mr Ruth Kool, bearer of the IKF Badge of Honour, at age 83 on 27 October 2022.…
Fun activities for youth in Catalonia