IKF patronaged event for U19 teams

In a little under two months the 30, 31 March and 1 of April the National U19 teams of Belgium, Brazil, Catalonia, Czech Republic, England, Germany, Hungary, Netherlands, New Zealand, Poland, Portugal and Turkey will face each other at the IKF U19 Open European Korfball Championship 2018 in Friesland, The Netherlands.

This year’s U19 tournament is a special one, while for the first time ever this long existent event has got an official IKF status. In 1996 the former district of the Royal Dutch Korfball Association (KNKV), Friesland, organised an inaugural tournament for U19 players from countries all over the world. The tournament was the idea of the late Jan Hanekroot who was then the IKF Development Officer for England. The first edition involved five countries and was very successful and since then the Junior World Cup, later converted into Korfball World Cup, has grown throughout the years in quantity and quality. A great achievement!

The Netherlands’ representation in the tournament began with a regional Frisian team and was followed in subsequent years by the Junior Talent Team from District North, now named The Netherlands RTC North. Since 2008, the national under 19 squad has been participating in the tournament. In this year’s edition The Netherlands RTC North will complete the participants of the event for the last time. Starting with 2019 only National teams of countries will be allowed to participate.

The 13 teams of the 2018 edition are divided into three pools. On the first day of the tournament most of the pool matches will be played. The remaining pool matches will be played on the first part of the second day. Later that day the 8 highest placed countries will play the quarter- and semi-finals. While the 5 lowest ranked teams will continue their tournament in a new pool. On the third and last day the final classification will be decided and will it become clear who can call themselves IKF U19 Open European Korfball champions of 2018.

Each match (except the final day) will last two times 15 minutes real playing time with a 4-minute halftime break. If there’s no winner after regular playing time, a golden goal period of 5 minutes will decide who comes out as winner.

More info, pools & playing schedule you can find at: www.ikf.org/event/ikf-u19-open-european-korfball-championship.

After another exciting event in Leeuwarden, The Netherlands, the final ranking in the U19 Korfball World Cup 2017 is:

Belgium was beaten in an exciting semi final by the team from Chinese Taipei 12-11. The Dutch U19 team overpowered the Czech team in the second semi final 25-5. In the bronze medal match the Belgian team won clearly from the Czech Republic 15-7

The Dutch youngsters, with Leon Simons, – former Dutch international – as coach, proved in all matches high quality qualifications both technical as tactical. The U19 KWC final showed quality korfball between Chinese Taipei and the Netherlands. At half time – after 20 minutes real playing time – the score was 6 – 13 and the difference was made as result of high scoring percentages of the Dutch team. In the second half the Dutch players continued their excellent match and extended the lead. The final whistle by referee Peter Busik showed 16 – 28 on the scoreboard. The Netherlands wins the U19 Korfball World Cup 2017.

In 2017 the 22th edition of the U19 Korfball World Cup will be played in The Netherlands. Again the event is played in Leeuwarden in venue ‘t Kalverdijkje.

The U19 Korfball World Cup is an IKF Patronaged Event. The Royal Dutch Korfball Federation (KNKV) is the organiser.

Finally in this year’s edition 13 teams will participate:

The semi-finals and finals will be on Sunday to decide the final rankings.

You can follow this tournament live on the following links:

The 22th edition of the U19 Korfball World Cup will start 14 April 2017 in Kalverdijkje Sportshall in Leeuwarden, The Netherlands. This tournament is an IKF Patronaged Event. The Royal Dutch Korfball Federation (KNKV) is the organiser.

The semi-finals and finals will be on Sunday 16 April.

The tournament will start with the opening ceremony on Friday 14 April 10:50 AM.

First time participant Dominican Republic earned the well deserved fourth place after a loss in the bronze medal match against Chinese Taipei (12 – 15). What  a huge result for this relative new IKF country.

The 2016 U19 KWC final showed a ‘fight’ between the eternal rivals Belgium and The Netherlands. At half time the Netherland had a six goals lead; 13 – 7. The many hundered speactators in the sportvenue and the live webcasting viewers saw an exciting second half. After 15 – 10 the Belgian team scored 5 goals in a row despite a Dutch time out at 15 – 12. In the final minutes the Dutch managed to expand the lead to four goals again. The end result is 22 – 18 and the Dutch win the 21st edition of the U19 Korfball World Cup.

KNKV President, Mr Rob Meijer and the alderman of sport of the city of Leeuwarden Mr Andries Ekhart awarded the prizes in the closing ceremony in front of an enthousiastic crowd. 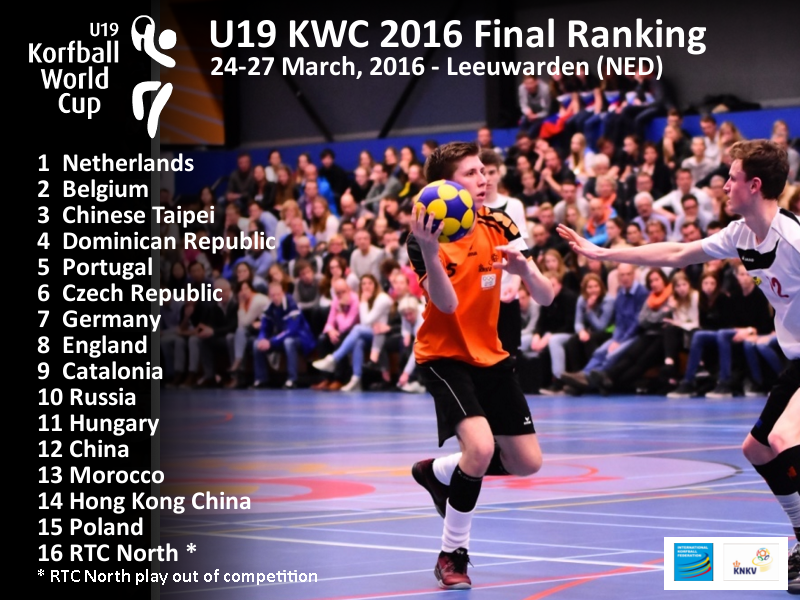 The organisers of the U19 KWC supported by the clubs in the area did a great job again to organise this youth event in Leeuwarden, The Netherlands.

(c) All images available in www.u19kwc.com/images 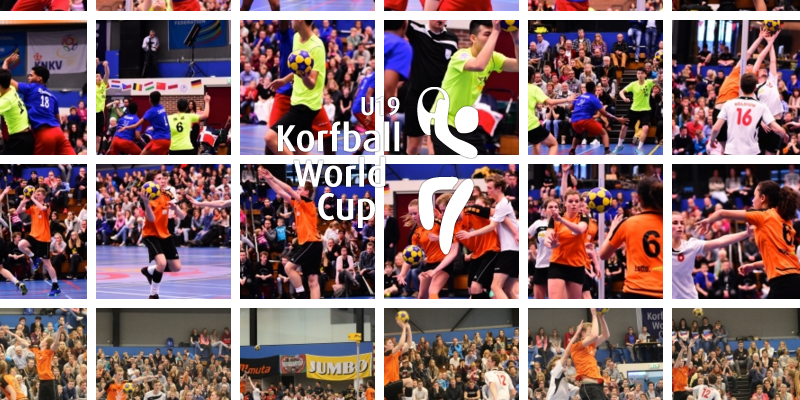 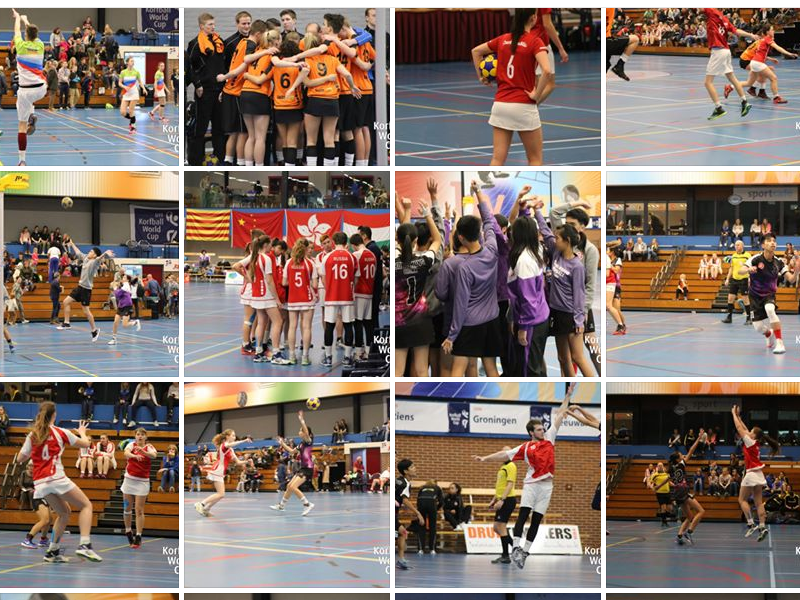 In 2016 the 21th edition of the U19 Korfball World Cup will be played in The Netherlands. The event is played in Leeuwarden again in venue ‘t Kalverdijkje.

The 2016 list of participants shows a record of 15 countries from all over the world. HongKong China and Dominican Republic are new participants in this U19 event.

The 21st edition of the U19 Korfball World Cup starts!

From Friday 25 till Sunday 27 March a record 15 countries compete to become the next U19 KWC champion. The Netherlands is the reigning U19 KWC champion. HongKong China and Dominican Republic are first time participants in this youth event.

The full match schedule is available: Click here for complete matchschedule, including pools 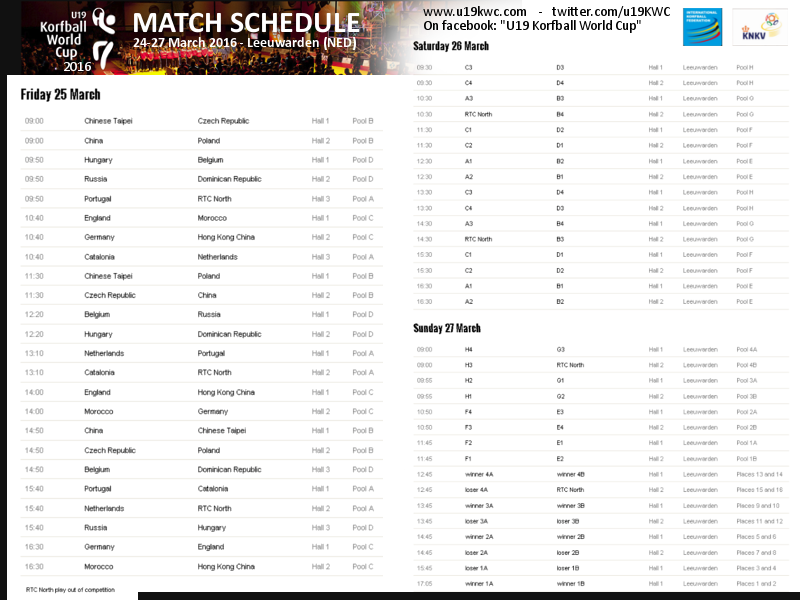 From 22 to 28 February 2016 the Dominican Korfball Association (ASOKODINA) is hosting the visit of the group.

Clinics in nine schools are the focus of the seven-day programme of activities, while in the afternoons and evenings the champion coach and international players will join the Dominican Republic’s national U19 and U23 team training sessions. These teams are currently preparing for upcoming international tournaments – U19 Korfball World Cup (U19 KWC) in Leeuwarden , The Netherlands in March 2016 and the IKF U23 World Korfball Championship (IKF U23 WKC) in Olomouc, Czech Republic – with intensive training during the week. 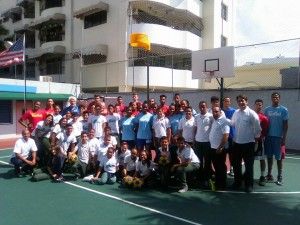 A record number of 15 countries have entered the 21st U19 Korfball World Cup 2016 in Leeuwarden (NED). This important international korfball tournament for players under 19 will be held from 24 – 27 March in Kalverdijkje sports centre and the Cammingha sports hall in Leeuwarden and is patronised by International Korfball Federation (IKF). For the very first time Dominican Republic and Hong Kong China are among competing nations.

The official drawing of the pools (according the rules and ranking of IKF) took place on 26 January. The results are as follows:

Winners of the 2015 edition were the Netherlands, followed by Belgium.

The IKF has awarded its Pin of Merit to Mr Geert Keuning from Leeuwarden (Netherlands) for outstanding service for the development of korfball. In 1995 Mr Keuning was one of the initiators to organize a youth korfball team from Leeuwarden to travel by bus to Russia as part of the city’s friendship link with Orel. This trip served as the birth of korfball in Russia. Over the subsequent 20 years, Mr Keuning has continued to support the development of korfball in Russia, many years as the official IKF development officer for Russia. To this very date Mr Keuning is active as a supporter, mostly in the background, to assist the Russian with many practical matters. He has also maintained the korfball friendship link between Leeuwarden and Orel, which was captured in a TV documentary of the Frisian TV a few years ago. Apart from his volunteering for the IKF, Mr Keuning has been organiser of the U19 Korfball World Cup since 9 years on behalf of the KNKV to support the Local Organizing Committee of the U19 Korfball World Cup.

IKF President Fransoo presented Keuning with the Pin just before the final of this year’s 20th U19 Korfball World Cup; 5 April 2015.