Semi-Finals day! Welcome to Day 4 of the korfball competition at The World Games 2022.

From 13 to 17 July 2022 The World Games 2022 is taking place in the city of Birmingham, Alabama, USA. Eight teams are competing for medals at the 11th edition of The World Games.

Below you will find videos, photos and updates – updated throughout the day. The Referee and Match Official appointments for Day 4 have been confirmed. 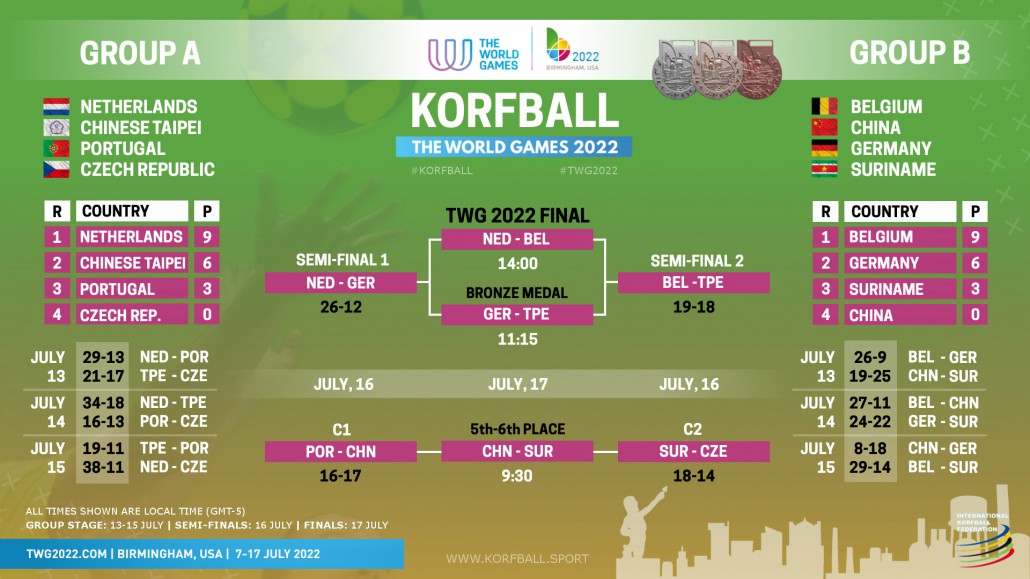 The starting team for Germany suggested that they were already looking forward to tomorrow’s Bronze medal match.

Germany’s Steffen HEPPEKAUSEN opened the scoring with a nicely worked goal, which was quickly cancelled out courtesy of a goal from Netherlands’ Harjan VISSCHER. The sides scored one more each [2-2] before Netherlands started to pull away. Half-time [11-6]

Both coaches made several substitutions in the third period with their focus now clearly on the medal matches tomorrow.

In the fourth period the spectators in the BJCC arena, many of whom were watching korfball for the first time were entertained with some beautiful goals.

Our second match today was the second semi-final between Belgium and Chinese Taipei. In their last encounter at The World Games in 2017, it was the team from Taiwan who were victorious, making the final of The World Games for the first time in history.

In 2022, the spectators in the packed stands at the BJCC arena in Birmingham were treated to a fantastic game of top-level korfball. Both teams gave it everything they had.

There was very little to separate the teams in the first half. At the halftime break it was advantage Chinese Taipei who went into the break ahead [12-14] after some incredible shot percentages.

The match was far from over, but it was clear that Belgium had to make some changes and stop Chinese Taipei from scoring if they wanted a place in the Final.

It was now down to the final 10 minutes of the match… for a place in the final.

With 32 minutes played Belgium’s Shiara DRIESEN won and scored a penalty [17-16] to put Belgium into the lead only for the second time in the whole match. This was quickly followed by Kian AMORGASTE who scored his 5th goal of the game [18-16].

Belgium were ahead by two goals. Was this enough for victory? The atmosphere in the area was electric, with chants from the packed stands of ‘defense, defense, defense’. It was an amazing spectacle.

Chinese Taipei’s Ya-Wen LIN then scored her 6th goal of the game to reduce the deficit back to two [19-17].

With just 90 seconds left to play, Cin CHEN scored her third goal of the game [19-18] to set-up a potential explosive ending to the match.

Taipei won the ball and quickly moved it into their attack zone… they had one last chance to send the game into extra-time.. Much to the delight of the Belgium bench and spectators in the area the Chinese Taipei attack failed to score.

Congratulations to Team Belgium on their victory. Belgium proceed to the Final and will play Netherlands at 2pm (GMT-5) tomorrow (Sunday, Jul 17, 2022). Chinese Taipei will play Germany for the Bronze medal.

The third match on Day 4 was between Portugal and China, the victor would return to play again tomorrow in the 5th/6th play-off match.

It was another good game for the spectators in the arena, a very entertaining match. In the first half China had managed to build a lead of 5 goals [6-11].

Early in the third period Portugal’s Catarina CORREIA entered the game from the substitutes bench, giving Portugal more options in offence and was able to rebound the ball. Portugal gained confidence and the goals started to go in. The game was on.

The final moments of the game were very exciting, would China remain in the lead? Would Portugal be able to equalise, or even snatch victory? In the third period China were ahead by 6 goals.

Unfortunately for Team Portugal they ran out of time. Final score [16-17] in favour of China. China will now play tomorrow in the 5th/6th playoff match on the final day of the competition.

Playing for a place in the 5th/6th playoff we have Suriname and Czech Republic. Both teams are looking for an opportunity to redeem themselves after missing out on a place in the semi-finals.

Once again Suriname proved that they are no easy push over and quickly brought the scores back to [5-5] in the first period. The remainder of the first half the teams traded goals, with Eliska ZIEGLEROVA from the Czech Republic scoring in the last second of the half to level the scores at [11-11].

It was a strong and spirited performance by Team Suriname in the third period adding another 5 goals to their tally and limiting Team Czech to a single goal [16-12]. It looks unlikely that the team from Europe will be able to recover.

The final score was [18-14] with Delano BRAUMULLER top scoring in the game with 4 goals. Congratulations to Team Suriname who will now play in the 5th/6th playoff match tomorrow morning against Team China at 9am (GMT-5). 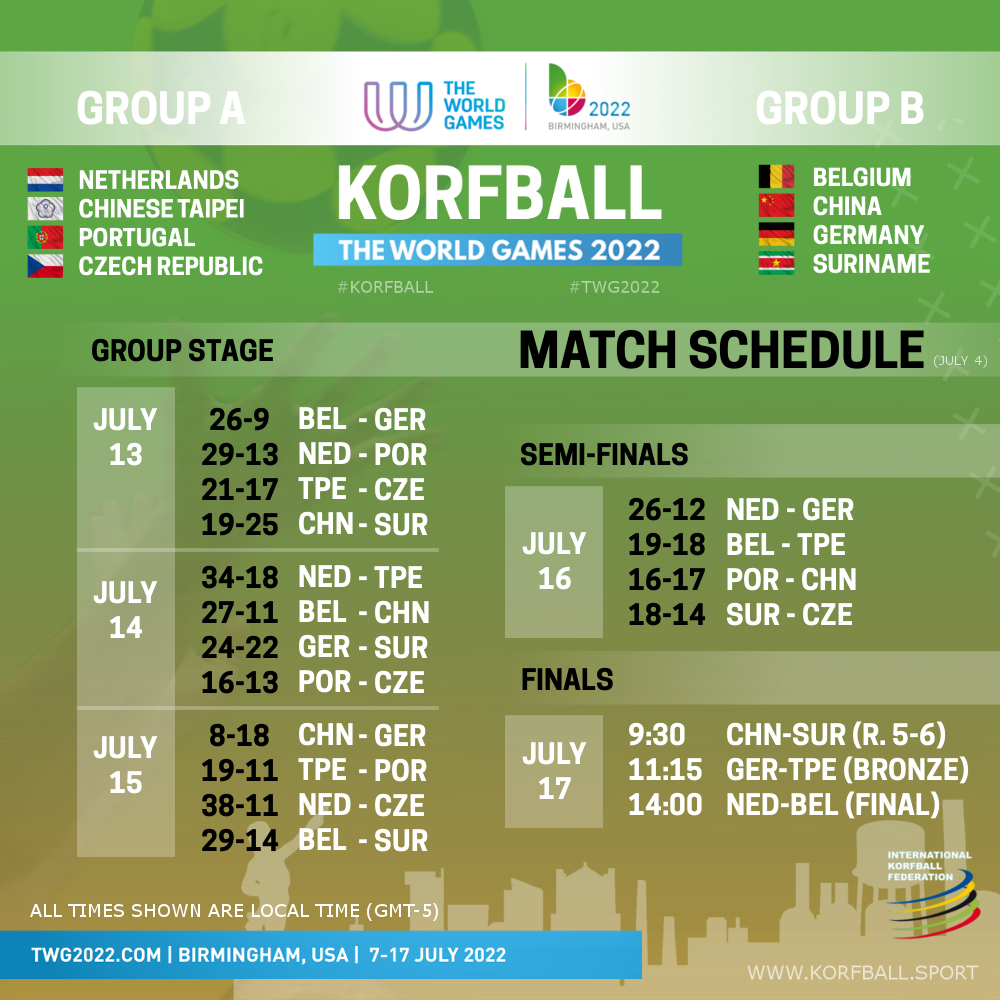