Charles BARKLEY, Honorary Chair of The World Games 2022 and former professional basketball player this evening met with korfball athletes, Fleur HOEK and Olav VAN WIJNGAARDEN from Team Netherlands in Birmingham, Alabama, USA and even had an opportunity to hold and shoot a korfball!

Speaking ahead of The World Games 2022 Charles Barkley said “I’m excited to support this event, and am looking forward to trying my hand at korfball”.  This evening he got his chance! 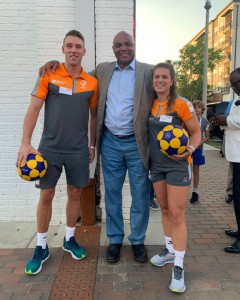 Barkley played for 16 seasons in the National Basketball Association (NBA) playing for Philadelphia 76ers, Phoenix Suns and Houston Rockets. He was selected for 11 NBA All-Star games and won Olympic gold in 1992 and then won the NBA’s Most Valuable Player award in the 1993 season.

Korfball is a dynamic and fast paced, mixed-gender team sport, specifically designed for men and women to play together. The playing field (also known as the court) is divided into an attack and defence zone, each zone has one post. A team has eight players on the court, two players of each gender in each zone.

Korfball in the USA

Team USA have played in The World Games on two occasions, 1989 and 1993, finishing in 5th place both times. Next month a representative team from the USA will participate in the first ‘IKF World Beach Korfball Championship’ in Nador, Morocco!

Find out more about Korfball in the USA by visiting the United States Korfball Federation website.

Visit our dedicated press page where you can find information about the sport of Korfball, The World Games, team roster/names, athlete interviews and also information about Korfball in the USA! Click to download the fact sheet.

We invite you to follow this korfball event 24/7 on International Korfball Federation (IKF) social media channels with the best moments, images, videos, highlights and latest information. Feel free to share your moments with us tagging the IKF on your posts and stories!